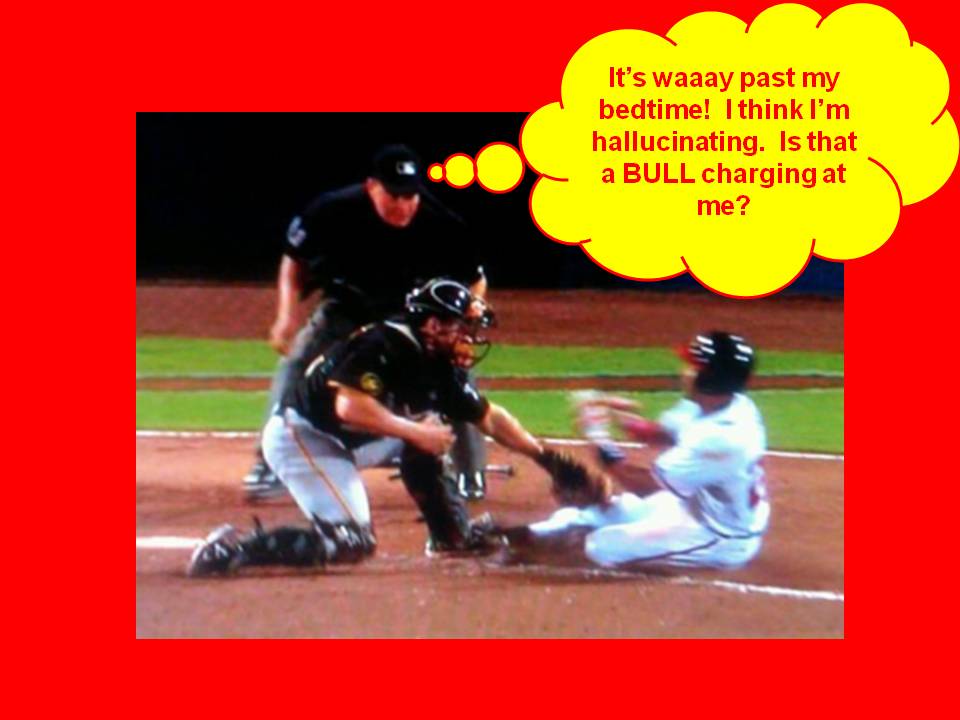 The short of it, the Pittsburgh Pirates fell from a tie for first place to third place on one HORRIFIC baseball call by home plate umpire Jerry Meals Tuesday night.  He called Atlanta Braves baserunner, Julio Lugo, safe after he was CLEARY tagged out sliding 5-feet from homeplate around 2:18am after 19 innings and 6 hours of baseball.  Most of the video has been removed from the internet via the MLB but click here and you should be able to see it if you haven’t yet.

Jerry Meals stated after the game that it looked like Pirates’ Catcher, Mike McKenry “ole’d” the runner like a bull fighter.  Sounds more like a reference to BULL%&*! than bull fighting.

OK, Jerry Real-deal-Happy-Meal-Seal-a-Meal-Oatmeal-Cormeal-Piecemeal-Fishmeal, it’s been a loooong time since we have seen thousands of  Pittsburgh Pirates fans, at the end of July, wanting to string up anyone other than someone from the Pirates front office?   But we’re all lookin’ forward to when you come to town in August for the series with the Cinci Reds!

Was gonna do some kind of lame joke about umpires, seeing and new glasses but that’s about as lame as saying “ole.”  So, when you come to town in August, we’re gonna present you with a car’s REVIEW MIRROR to help you with your job.  Why?  Because “objects in mirror are closer than they appear” and THAT might help with that umpiring stuff, Ya JAGOFF!!

As a matter of fact, how long has it been since we simply saw thousands of Pittsburgh Pirates fans at this point in the season?  Totally awesome. GO BUCS!

We had many send us notes reqeusting a Jerry Meals Jagoff post.  Thanks to Facebook Follower “ARNOLD SLICK” and Twitter follower were first Drmlebo471 for being the FIRST Honorary Jagoff Catchers for this.