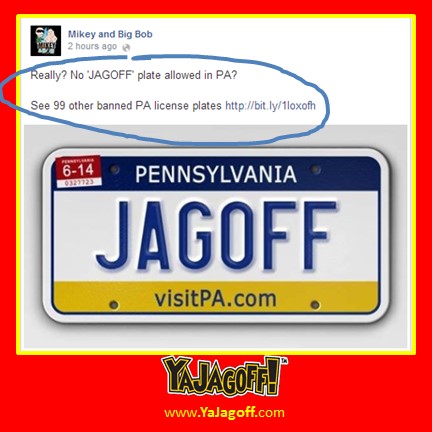 Yesterday, 96.1 Freak Show hosts, Mikey and Big Bob posted, on their website, the 100 license plates that are banned in Pennsylvania. One of them is the word Jagoff.

Here are some of the details:

PennDOT keeps an internal “Do Not Issue” list of about 10,000 different text/numbers combinations that it finds too rude, crude or generally inappropriate for the roadways of the Keystone State.

As an FYI, a couple of years ago, the Pittsburgh City Paper’s Chris Potter wrote an inside-back-cover full page article about the history of the word Jagoff.  It comes from Jagger Bush and has no swearing connotation whatsoever.

So, as of right now, we are officially banning the word “Pennsylvania” from our blog (until we need to use it to make a joke).  This place that borders Ohio, Maryland, New York, New Jersey and Delaware will now be known to us as “The Commonwealth Whose Name is Banned By Us.”

We need to ban together and figure out how we can get the word “Jagoff” on to license plates in “The Commonwealth Whose Name is Banned By Us.  Like this guy did: 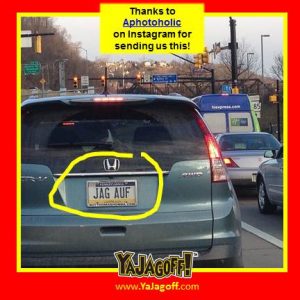 Second, we are going to suggest to the “”The Commonwealth Whose Name is Banned By Us” that additional terms/ phrases be IMMEDIATELY removed from the publication due to possible confusion for offensiveness:

In the meantime, to the people running “The Commonwealth Whose Name is Banned By Us,”  LIGHTEN UP Ya Jagoffs!!!