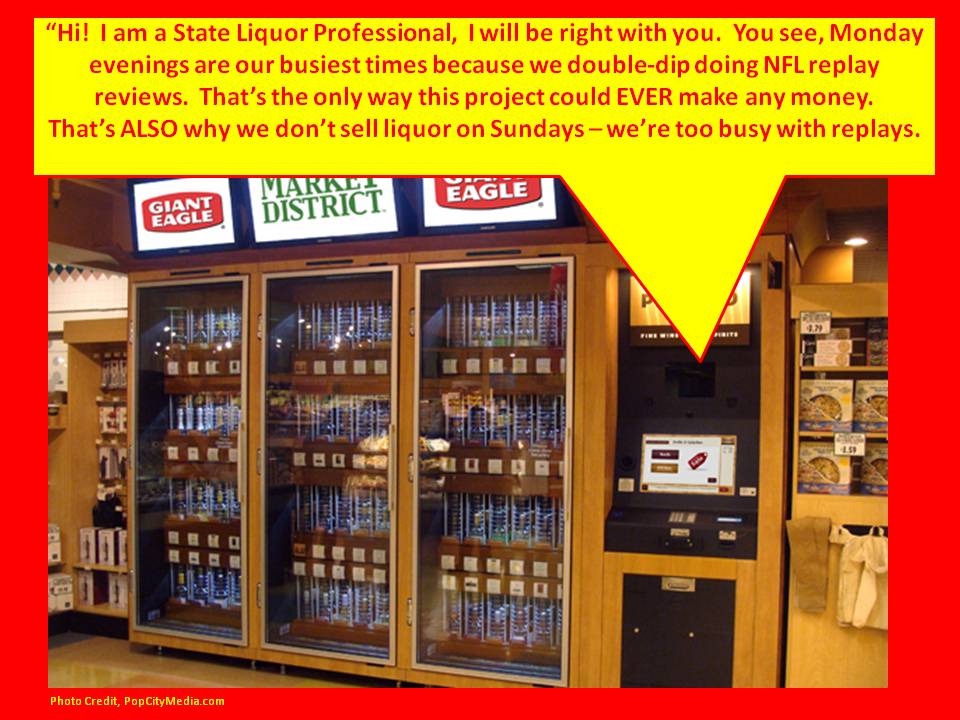 A Post-Gazette article, last week (here) is pretty much the eulogy on the Pennsylvania Wine Kiosk “experiment.”  It’s probably also a pretty good “white paper” on what politicians know about running a real business.

If you’re unfamiliar with the story OR the crazy Pennsylvania system of purchasing alcohol ONLY from a State Employee who is highly trained and EXTREMELY vigilant on WHO can buy alcohol, ya see, Pennsylvania has these things called State Liquor Stores.  The closest thing to alcohol we can get in a grocery store is something about 28 times less proof than Catholic altar wine.

So, to try and make our lives better and alcohol purchases more convenient,  the State folks decided, “Hey, let’s let minions purchase wine from electronic kiosks in grocery stores.  It will be sooooo convenient that we will be able to charge higher prices – ALMOST enough to pay off the million dollar machines used to dispense the 10 or so types of wine in it.  People will think we’re BRILLIANT!”

(My first thought was, “WHAT?  Have you seen how mangled peanut-butter-cheese crackers get when THEY fall from the top row?)

Well, needless to say the experiment didn’t go so well.  It actually got to the point where, the machines didn’t work SO MUCH that the State Liquor folks actually paid an employee to sit at the machine to attend to the 1 or 2 people that tried to use it each day in the grocery store.  Isn’t that like Parkvale Saving Bank paying a bank teller to watch transactions all day at an ATM?  (Come to think of it, that would probably be pretty entertaining on a Friday night at any ATM near the Strip District!!)

According to the Post-Gazette article, (CLICK HERE FOR IT):

1 out of 21 transactions had a mishap

What was Wal-Mart actually gonna sell outta these things?  Didn’t think those machines held wine BOXES!  Well, the good news is that nobody tried to rock or tip one of the million-dollar machine because their purchase got stuck against the glass!!

So Liquor-Control-Freaks,  we appreciate you trying to make our lives so much more convenient.   You moved us from the 19th century where we have to locate a special alcohol store, separate from where we get the rest of the snacks and mixers, to a system that allowed us to purchase alcohol in a grocery store SIMPLY by, reviewing the wine kiosk choices, calling someone on the video screen, showing them my identification, proving that I am not already drunk by talking to them and blowing into a breathalyzer, waiting for the verification, then paying for the wine and then hoping that the bottle actually comes out of the machine!! (True CONVENIENCE!)

The good news is, there is no Nobel “Fiscal Responsibility” Prize so you don’t have to be nervous about missing out on a nomination.  Our suggestion is, if you’re going to put alcohol in a machine at a grocery store, we suggest those CLAW machines so that, if I don’t get my wine, I might be happy with the Van Halen poster, RUN DMC pillow  or stuffed Toy Story Alien doll, Ya Jagoffs!

In this article: Jagoffs, Liquor Control Board, Pennsylvania, Wine Kiosks