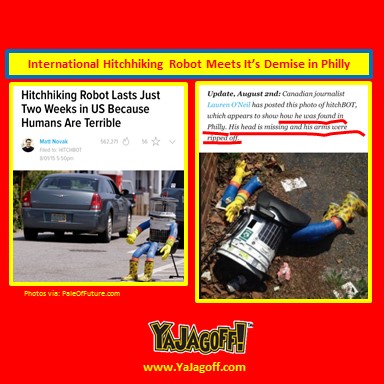 Normally we reserve this blog post space for anyone trying to embarrass the rest of us Pittsburghers, making the area look bad or whatever.  But, we never miss a chance to pick on Philadelphia..,especially  when they are embarrassing ALL humans.

A robot, known as HitchBot on social media, was a social experiment which originated  in Canada. In true Canadian, fashion, HitchBot was to be passed around like the Stanley Cup. In its first two weeks, HitchBot had been around Canada, Europe and was just starting its tour through the United States.

HitchBot was dependent on humans to pass it around the world while it recorded it’s interactions. HtchBOT was designed to be a talking travel companion and could toss out factoids and carry limited conversation. A GPS in the robot tracked its location, and a camera snapped photos about every 20 minutes to document its adventures.

Well, it saw some of the East Coast and then it ended up in Philly… and I mean.. ENDED UP… as in never got out of the place because it’s now in pieces.

Now I realize we don’t really hate EVERYONE in Philly…mainly its just people in Flyers and Phillies jerseys and, sometimes, when the team intermittently becomes  relevant, people in Eagles jerseys.  But, whomever disassembled ol’ HitchBot should be hated at the level of someone in a Flyers Jersey with “I Love Cleveland” across the name area on the back and a “there is no Santa” tattoo on their forehead OR to the level that most Pittsburghers suddenly hated Marlon Byrd and the Cincinnati Reds yesterday.

Hey Philly,  thank GAWD you won’t get your hand on the Stanley Cup anytime soon.  To be honest, its probably good Phil Bourque didn’t get his hands on HitchBot at Mario Lemeiux’s pool too!  But, since you’re in the we-tear-limbs-off-of-visiting-robots mind set, we’d be happy to send NHL Commissioner Gary Bettman over there if you promise to greet him the way ya did HitchBot, Ya Jaaaaaaaaaagggggggoooooooooffs!!!

Thanks to @NYCMusicNerd for hitting us up about this and being our Honorary Jagoff Catcher for today!

In this article: HitchBot, Philadelphia