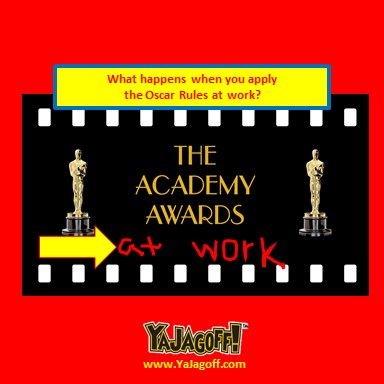 Ok… if it wasn’t for Pittsburgh’s Michael Keaton up for an award, I seriously doubt I would have made it through the Oscars show last night without some type of advanced life support.

But, then it donned on me.  What if we used the Oscars rules in real life work.

1) What if we had to walk “the carpet” every day into work and someone from Human Resources was standing there checking on your desire to be there, who you rode the bus or carpooled with and then you got to mention “who” you were wearing, i.e, JC Penney.  And of course, you’d have 8 out of 10 people say Target as “Tarjjjaay” and think they were funny and the first ones to every say that.   The point of this would be Human Resources could scan those who were not appropriately dressed.

2) On project proposals, there is a secret vote and then the boss comes in and lists the 3 best project nominees and then opens an envelope to reveal, “The Best Spreadsheet for the Hogan 3/4″ Hopfler Coupling Satellite Warehouse On Time Delivery Model” goes to, Larry in 2nd cubicle over by the window on the 4th floor.”  Then Larry tells everyone how honored he was just to have his proposal considered with all of the other talented submitters and then goes off on a tangent about his secret passion… how the curve ball should be permitted in coach-pitch baseball leagues.

4) When people drone on at those meetings, you simply queue the music on your smartphone and play them off and they are REQUIRED to shut the @#@# up!! (This one is probably the best adaptation of any of the awards ceremony rules.)

See yinz tomorrow once I wake up from my Rip Van Winkle sleep cast upon me by the entertainment level of that show last night.