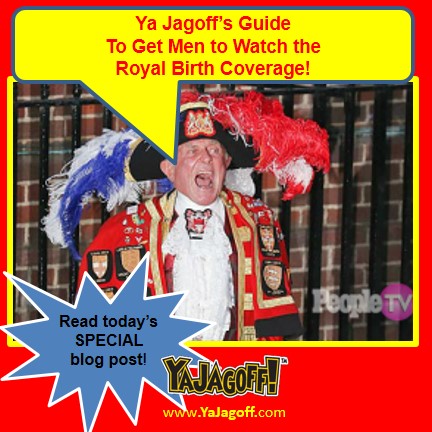 Something a little different today……

Maybe a little less, but still a global majority, have been glued to TV, Facebook and Twitter awaiting the results of the Royal Birth.   My guess…. most of those were female.  A small percentage of them were senior citizen men, married greater than 45 years, who sat with their wives and PRETENDED that cared, but were secretly sleeping.  (Like they pretend to enjoy going to the grocery store and end up in the parking lot sleeping in the car.)

Here are my thoughts on how to increase the number of males interested in the Royal Birth:

Start a “Royal Uncle” Fantasy League – choose the best 8 male celebrities who you believe will be sober, bathed, shaved and available to be in London the next 3 months.

Coordinate betting on the chances that one of the groomsman, from when Kate and William  got married,  shows up to hold the baby, for the first time, with one of the Royal bachelor party strippers AS HIS FIANCE.

Name the baby Big Ben and NOT after the iconic clock! From Jay McCullough

They plan to name the kid after a food item, like Nachos or Pizza or Beer Heather Thompson

Highlights of sideline cheerleaders and large-bellied, drunk, hairy men, lining the roads outside the hospital, that have their naked torso’s painted with “GOOD LUCK and GOD BLESS Baby Prince.”

Have all female viewers make the SLIGHTEST hint, that “Special Favors” could be available that evening if her man watches the Royal Birth coverage with her (picture Pavlov’s dog here watching the baby coverage because the dog doesn’t know she’s really lying.)  From Mary Fran Coulter

Fart monitors in the hospital maternity ward waiting room chairs and a GoPro camera mounted in the corner…..all seats wired with sensors that immediately trigger an on-screen, green-cloud graphic over the head of anyone in the waiting room that passes Royal gas.  Then take bets on “Who ate it?”

Now THAT’s how you get a guy to be interested in the Royal Baby Coverage, Ya Jagoffs!

What are your suggestions on making the Royal Baby reporting  “guy friendly?”  Comment below.