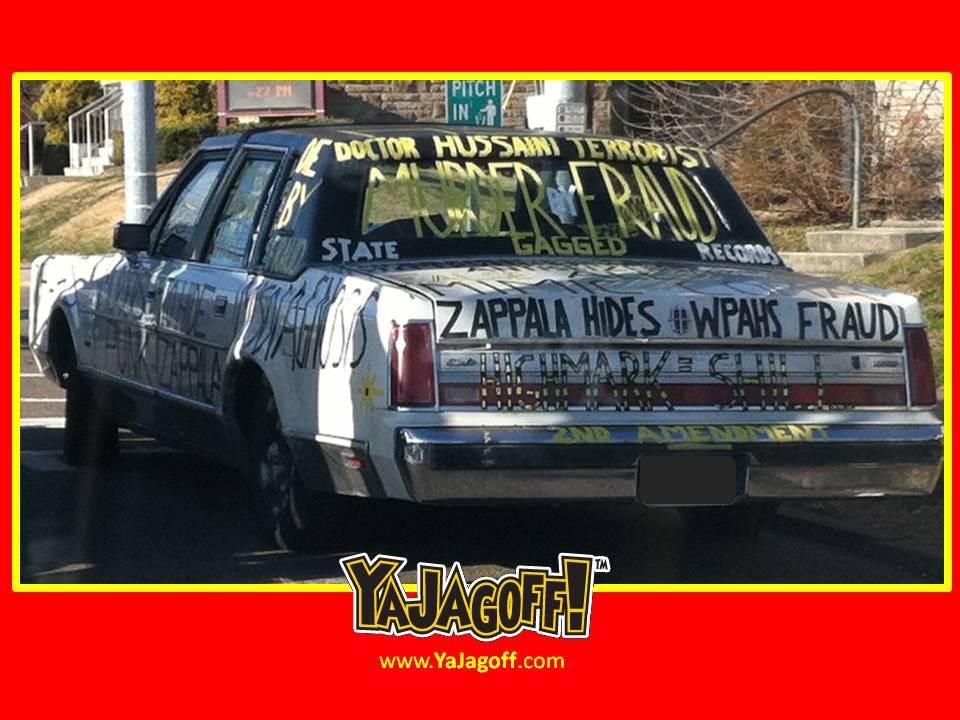 So we had a number of options for a Jagoff post today….
the Dallas Cowboys

the Dallas Cowboy’s owner Jerry Jones for, simply, being Jerry Jones AND for allowing Josh Brent on the sidelines in team gear

the NFL Commissioner, Roger Go-Ta-Hell, who drops a multi-thousand dollar fine on a Steeler player anytime someone in the stadium drops a hankey but lets Josh Brent hang out with the team on the field during a game
But…writing about any of those would make us sound like sore losers… which we ARE…but we just don’t want to SOUND like sore losers.  So we went to our protest man from the Bellevue, PA area.

Well, it’s pretty clear that this guy has a serious gripe… BUT…. to have your gripe taken seriously, would anyone suggest writing slogans all over your car with electrical tape???  Were there no poster boards available at Pat Catan’s or Michael’s?  Were there no sandwich boards avaiable to staple sharpie-written notes to and sit around town?  Were all of the corners to yell from in downtown Pittsburgh taken by the Christian Science Monitor religious mag reps?

Ya know, what better way to show that you have your act together and your legal briefs in order than to spread electrical tape all over your car….. including the back window AND, if you look closely, the gas cap door!!!!!!

Hey… I’d like to be taken seriously PLEASE!!!!!!!!!!!!!!!  I didn’t have enough toilet paper to paper Mr. Zapalla’s office or the Highmark Building downtown sooooooooo here ya go!!!! A taped-up car!

If anyone reading this has ever tried to tear electrical tape with your bare hands, you know exactly how RAW your thumbs would be after the work on this particular car.  Our how sore your front teeth would be from tearing tape.  And, at the price of electrical tape, this guy probably could have  taken the same money and purchased a billboard along Route 65 in Bellevue!!!

Silly joke…. Is this car a PERFECT example of a TAPED CONVERSATION?????

Hey Taped-Crusader.. (now ya have to admit that there was awesome) good luck with your protest.  We honestly wish you the best.

In the meantime, you would probably be more successful if you printed off coloring pages pics of your PROTESTees and spent a night laying on your living room floor on your belly, with your feet in the air and your tongue sqeezing out the side of your mouth, while you colored their teeth black, their faces green and gave them blood shot eyes and bushy eyebrows.

In the meantime, it would seem that anyone in Bellevue who needs electrical tape for the Christmas trains or lights might be pretty much, S.O.L. thanks to you, Ya Jagoff!

Remember our Neighbor Jagoff with the home-painted signs from last year?  Click here to read.

We don’t SPAM… just blog updates once per day.

Enter your email address in the block at the upper right corner.