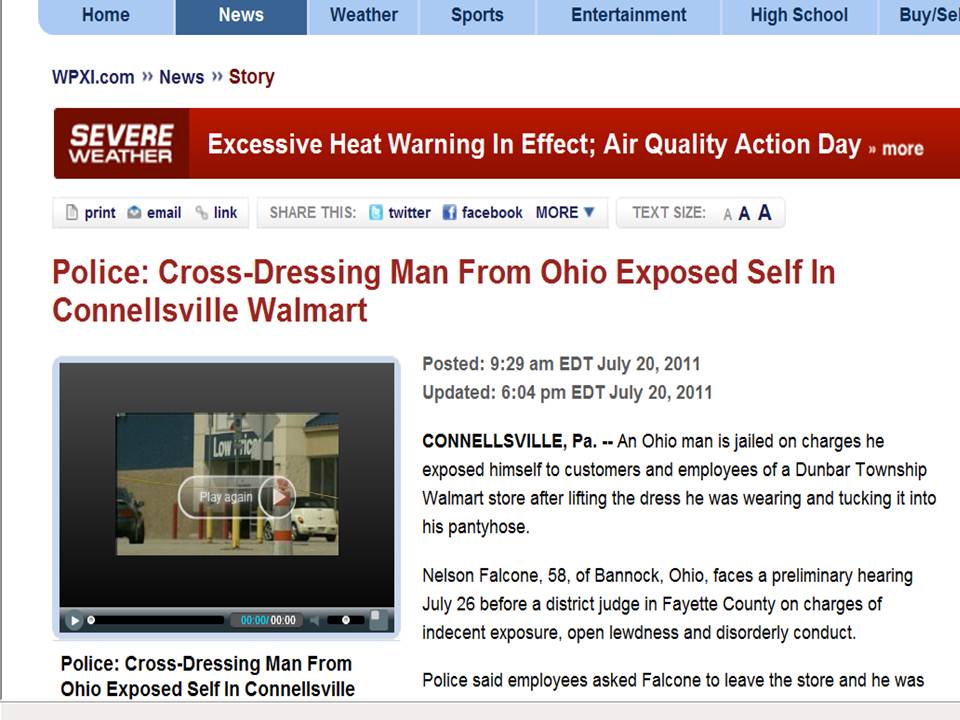 Their reputation is such that 58 year-old Nelson Falcone drove about 100 miles from his hometown of Bannock, Ohio to PUT ON A DRESS AND SOME PANTY HOSE and  EXPOSE HIMSELF  in the Walmart Garden Center of Dunbar Township, Fayette County, PA!  I’m guessing Nelson has seen all of those “Walmart People” photos on line AND reads our blog about Fayette County stories and decided, “I can get away with this over in PA!”  Kinda like walking around New York City in underwear – nobody would notice!

“ATTENTION WAL-MART SHOPPERS, Not in MY house” said the local security guard!  Yep, even the folks in Fayette County found this wierd and offensive!

What WE found most peculiar was – our buddy Nelly chose to do this in the Garden Center area of the store.  At least if he/she would have done it in the section where they sell pantyhose and ladies clothing, he/she would have had an alibi like, “I just wanted to see how they fit and I had trouble finding a mirror.”  Exposing yourself in the Garden Center only leads to a week alibi like, ” I was only looking for a hoe!”

Fayette County, sorry that Nelly did this to you.

Nelly, next time ya wanna show your “junk,” run for public office.  After you win, then text some photos to people – not only is it more exciting that way but you’ll also have a chance of being offered your own talk show on cable TV, YA JAGOFF!!!

BTW, check out  @wpxi reporter Courtney Brennan’s opening line of this story, “This is one of those stories that makes you wonder what in the world is wrong with people, SERIOUSLY!”  Haaaa…haaaa…. perfect opening.  Very realistic, waaay better than some stupid play-on-words opening!!!  Nice work Courtney!

In this article: Dunbar Walmart, Nelson Falcone, Transvestite Exposes Himself in Walmart