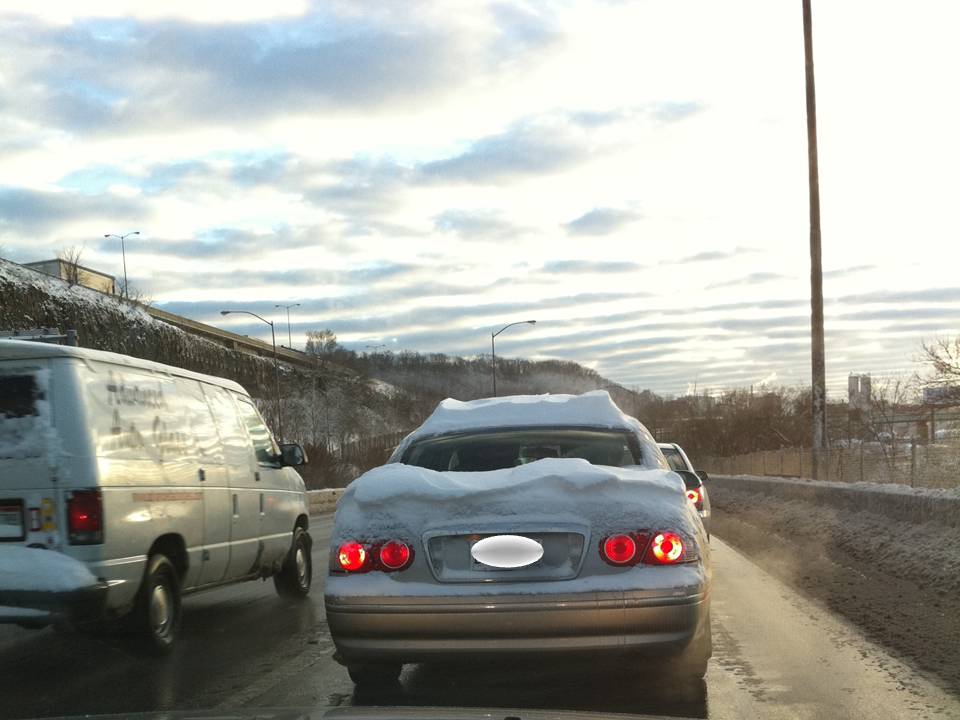 So last week we posted “THAT GUY” who says “Hot Enough For Ya?”  This week, we KNOW it has ben hot enough for SATAN.  I’ve been holding this post for that time when we needed to THINK COOL THOUGHTS!

There is a law in Pennsylvania that says you have to clean the snow off of your car.  It’s another one of those laws that FORCES common sense cuz, why WOULDN’T you clean off your car so you can see???

Last winter I got behind this West Verginny driver.  Somehow they didn’t get the memo that you are supposed to see behind you while you drive.  I was behind them thinking, “Thank God for potholes” so that the snow shakes off.  The snow on the trunk is piled higher than KDKA Radio’s Robert Mangino’s HAIR!!! (Luv ya anyway Mangino)

As I passed this car, I saw a Mountaineer sticker on the side window.  It then hit me as to why SOME of the snow was gone.

Hey Mountaineer driving pal, if ya wanna abide by the PA “clean the snow off your cars” law AND see out of that “thingy” called a rearview mirror while you are driving, yer gonna have to light the couch,  in your back seat, on fire a little earlier in order to melt the outside snow BEFORE you start driving on the road, Ya JAGOFF!

Those of you that don’t believe in Karma, Kismet or Kiki Dee (uh, she was just another “k” word), take notice.  It’s been 40 degrees each night since I set this post to go live!  No need to THANK me.