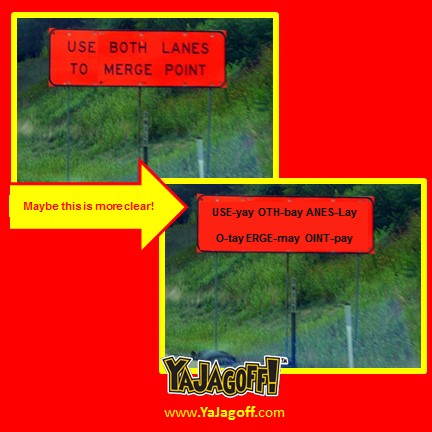 For some reason, our personal competitiveness seeps in to a simple drive.

We don’t want that car next to us to pass us so we speed up to make sure that it doesn’t.

We have to pass the driver in front of us despite the fact that we have to turn right at the very next turn and will have to cut him/her off to do it.

And, the Merge Point!

For some reason, many drivers cannot seem to figure out  the fact that losing that promotion at work, losing an argument to your significant other or watching police speed-trap videos on YouTube should not translate to driving… especially while approaching a construction zone.

This from one of our followers:

Dear 22/30 drivers: when you see this sign and you ALL choose to line up in one lane leaving the other lane TOTALLY open, don’t get mad at me because I’ve read the signs (yes, plural…there were several of them in just that one mile stretch that I was actually on) and continue to drive in the OPEN lane.  READ THE SIGNS…They are there to help keep traffic moving. Stacking up for miles and then trying to block traffic at the merge point only SLOWS traffic down…”

Haaaaaaa (a little bit of giggle pee trickle)….. love it when I don’t have to write an entire blog post!  Nice work! And even more, a Twitter-er-er tweeted the same situation and, writes the ending of this post quite nicely….

“It happened again today! Can people not read signs!? Move out of the effing middle of the road”

Let me make one correction on that:

“It happened again today! Can people not read signs!? Move out of the effing middle of the road, YA JAGOFFS!!”

Thanks to Drew P from Facebook and @christielee008 from Twitter for being our Honorary Jagoff Catchers for today’s blog!