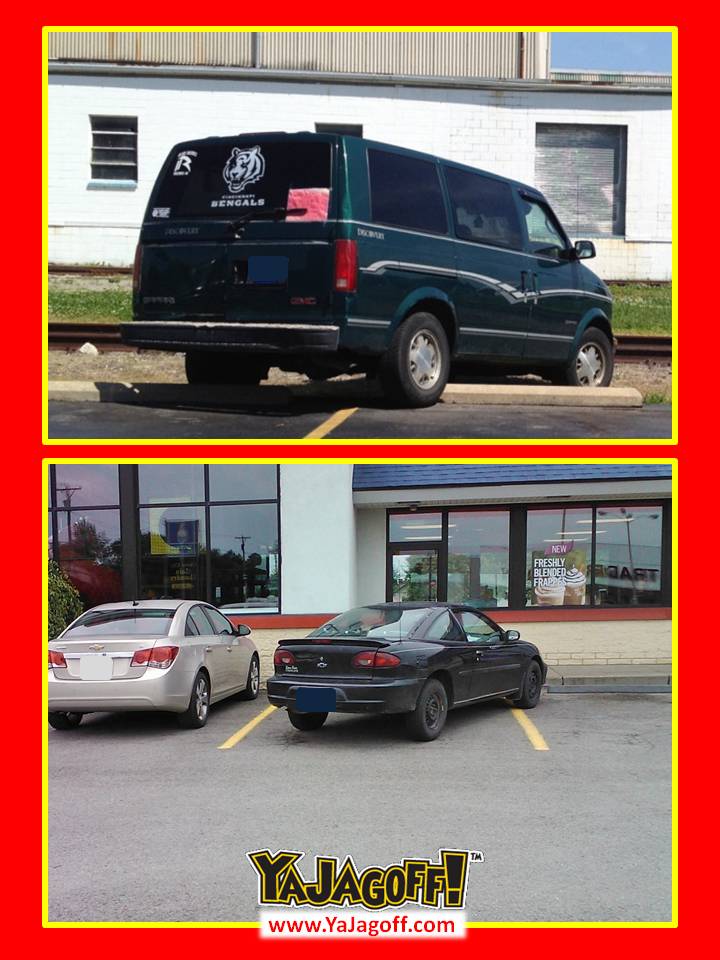 Ya know, as “Yinzers” we always like to pick on Ohio-ans for some reason.  Look how we beat up on Cleveland folks about the Browns vs. Steelers rivalry and look who owns the Steelers vs. Bengals rivalry.  Then outta nowhere this past weekend, the Pirates go to Cleveland and win 2 of 3 baseball games.  Seriously, we used to have to sit down and shut-up during baseball season.  We still might, the season is not even half over.   But, for this week, even in baseball, Pittsburgh is better than our Ohio neighbors.

EXCEPT.. yes EXCEPT when it comes to parking.  Look at these 2 “Peter Parkers” in the pics above.  (If you are new, click HERE for our  Peter Parker definition.) The van pic is from the Cincinnati area and the car pic is from the Grove City, PA area.  UH-OH… looks like, in parking, we are pretty much in a tie with our Ohio neighbors!!

And the van driver from Ohio even took an extra step to parking their vehicle safely.. they INTELLIGENTLY used the curb stop as a wheel chock!!  Why didn’t we Pennsylvanians think of that?

All this time we’ve simply pulled UP to those cement thingies— so far up that we scraped the bottom of our bumpers and then, did the SMART thing said, “Owwwww” then panicked, put the car in reverse and scraped it again!  Whodda THUNK that we were supposed to JUMP the curb!

Either way, it APPEARS that neither of these diagonal “Peter Parkers” understand the intentions of those silly lines on the ground.  But, don’t judge too quickly.  We sent Jagoff investigators to the Cincinnati area and to Grove City and, not only did they seize the opportunity to pile up on apparel from the Outlet Malls, they found out that, both of these parking lots were recently changed from diagonal parking to perpendicular parking.

Sooooooooooo its NOT that these people don’t know how to park, it’s simply that nobody was courteous enough to notify these drivers that they are NOW supposed to park straight!!!!  Works for you??????  Ahhaaa.. not us either!

Hey Bengals fan, we are sure that the Bengals are proud that you drive around flashing their logo!  Probably just as proud as the Pirates are when someone drunk from the South Side gets arrested in front of a TV camera with a PIRATES shirt on!

And Mr. Grove City, thanks for keeping the score with Ohio at .500 on parking.  Hoping your excuse isn’t, “I parked that way so that nobody will put a nick in my door.”  Seems that you’re about 2,341 nicks and, at least 2 hubcaps, too late for that.

To both, thanks for not going through the “drive thrus.”  With your sense of spatial awareness, we’re thinking that would have had a very, very NEGATIVE ending, Ya Jagoffs!

Special thanks to Twitter Followers @Bschultzjames and @SixBerg for being our