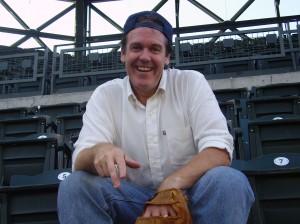 That’s Tim Jones, a Seattle-based blogger with a Pittsburgh connection, up there.

This week, while I am still running back and forth between  Joe’s Rusty Nail, Jack’s Bar and the Stroll Inn celebrating the 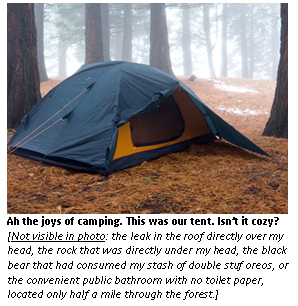 Recently I started worrying that my wife no longer loves me. No, I didn’t catch her with another man. And no, we didn’t have another nasty argument about the proper way to load a dishwasher. It was much more troubling. My wife actually said the three words I have long dreaded: “Let’s go camping.”

Why would any woman who claims to love her husband force him to endure a weekend in the wilderness with no access to ESPN Sports Center? My wife thought it would be fun if the two of us had a romantic getaway. I was envisioning a cozy B & B overlooking the ocean. Or maybe a posh resort / spa where we could get a couple’s massage, whatever that is.

But unbeknownst to me, my wife’s concept of a romantic getaway included physical and emotional torture – camping. When she first brought up the idea, naturally I thought she was kidding. When I realized she was serious, I apologized profusely for whatever I might have said or done to upset her. I even promised to do the dishes for a month. Turns out she wasn’t upset at all. She just really wanted to go camping.

So she booked us a campsite for a long weekend at some God-forsaken state campground deep in the wilderness beyond any cell phone range. The nearest carryout pizza was 50 miles away. I believe there is a term for being forced to sleep outdoors in the cold and wet, with no bathroom, no hot running water, and no bed to sleep on. It’s called being homeless. And when is the last time you heard a homeless person say to his buddy, “Hey, I have a great idea. Let’s go camping!” You never will, because they know that compared to their lifestyle, camping would be a step down.

My wife picked out a great spot. The next closest campsite was over four feet from our postage stamp lot. I couldn’t decide which part of our temporary housing to call dibs on for my sleeping bag – the section that sloped downhill or the section covered with tree roots and half-buried rocks. They both looked so appealing.

Apparently my wife’s idea of a cozy bungalow was a 6’ X 6’ tent that leaked at the slightest hint of moisture. We were assured of the pleasure of several healthy walks each day because the nearest bathroom was half a mile away. Let me tell you, it doesn’t get more fun than waking up at 2:45 am in a claustrophobic tent in the pouring rain, desperately needing to go to the bathroom. What a thrill it was navigating in the darkness, bumping into trees and tripping over rocks in my bare feet, with nothing but a fading flashlight that cast a faint glimmer of light on any object that was within a 10-inch radius.

But the harrowing, painful journey over the rocks and twigs was worth the struggle. Because at the end I discovered a brightly lit 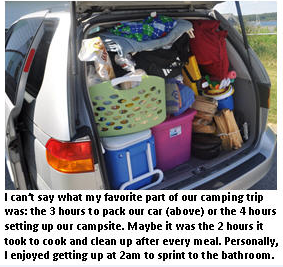 lavatory. The only thing it lacked was toilet paper and a stall door – oh and any semblance of sanitation.

The next morning brought yet another adventure: taking a shower. If you ask me, few things are as exhilarating as a bone-chilling shower consisting of glacier-fed ice water in a state park bathroom that appears to have been last mopped sometime during the New Deal. I could be wrong, but I’m pretty sure they copied the floor plans for these austere restrooms from some Civil War POW camp.

Another delightful aspect of my camping experience was the abundant wildlife, by which I mean the hordes of mosquitoes that assaulted me every morning as I emerged from the safety of our tent. Here’s a thought to ponder: ever notice how mosquitoes are always trying to get INSIDE your tent? That’s because even insects know how horrible it is to be stuck OUTSIDE.

And I can’t talk about my love of the great outdoors without mentioning another thing I adore about camping: bears. As I lay my head on my pillow at night, nothing puts my mind at ease like the thought that there is a 1/100th of an inch wide thin nylon sheet protecting me from a hungry 800-pound carnivore that would consider my thigh a light snack. Speaking of wildlife, another high point of my camping adventure was the invasion of fire ants that had apparently decided to have a convention inside our tent. Here’s a fun fact I’ll bet you did not know. Guess what food bears love the taste of? If you guessed fire ants, you win! Go to the head of the class. 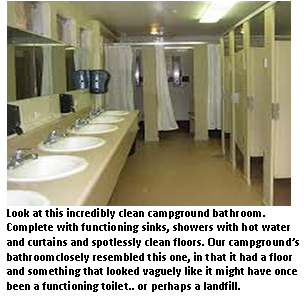 Perhaps the highlight of my weekend was the rustic meals. Sure, back home I can nuke my Stouffer’s spaghetti in five minutes. But it’s much more fun to cook up that same meal on a tiny camp stove in slightly under an hour. And clean-up was a snap. I just meandered 500 yards to the one communal spigot, where nine other people were also waiting in line, to fill my one-gallon bucket with water – which procedure I then repeated three more times to collect enough water for a subsistence clean-up. In about the same amount of time that it would take to do something far more pleasant for 45 minutes, our plates, pans, and plastic sporks were in the ballpark of something vaguely approaching clean-ish.

But then a miracle happened. Apparently, one of us forgot to lock the padlock on our Coleman cooler. A bear broke into it, consumed all our food, and left behind an unopened jar of mayonnaise and a shred of plastic that bore a faint resemblance to the lid of our Coleman cooler.

I wish there was a way I could have thanked that bear personally – because with no food left but mayonnaise, our magical camping getaway had to conclude sooner than planned. Which brings me to my very favorite part of my camping trip: the drive home. Ah. Now that was paradise.

VIEW from the BLEACHERS

In this article: Jagoff, Jagoffs, Tim Jones, View From the Bleachers, Ya Jagoff