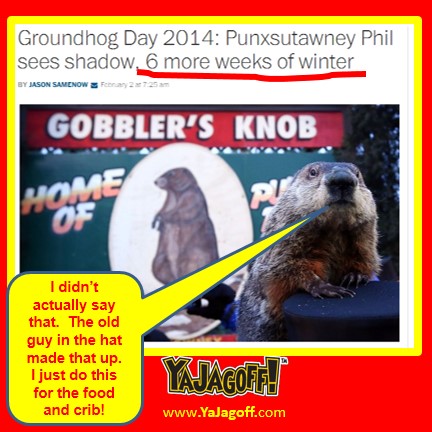 Many people are coming down hard on Punxsutawney Phil for seeing his shadow and predicting 6 more weeks of winter.  But, it’s not really his fault and he reached out to this blog to express his thoughts.  He doesn’t type so he called the YaJagoff secret studio line and filed this report on our ground hog interpreting app.

Seriously… everyone makes fun of me.. but it’s not me.  Do any of you realize that I do this stuff for the food, the much-better-then-most-humans-get living conditions and the t-shirt royalties?

Um… I mean….everyone jokes about all of the bright lights and me seeing my shadow… seriously, come up with something new!

By the way, I don’t know how to write or type… and you believe I’m behind the message that the old-guy reads… which, by the way, is a piece of yellow tablet paper glued on to two tree twigs.  Your kid makes better crafts in kindergarten.

Then that guy grabs me underneath my belly and holds me up in the air in front of a bunch of drunks.  It’s like a scene out of Lion King re-produced by David Hasselhoff and Captain Morgan.  For the record, that guy’s hand squishes my stomach up into my throat and it causes me esophageal reflux problems.  For a month after Groundhog Day, I eat nothing but Tums.

And for the record, that old guy, he looks into my cage to grab me and, some people wonder why I don’t bite him, especially for waking me up so early.  The reason why I don’t bite him is because I have no interest in getting close.  His breath always smells like Luden’s Honey Liquorice throat lozenges and his hands smell like Ben Gay.

One other thing while I’m letting loose, Gus, the old PA Lottery sleazy bookie nearly ruined my life. He’s the guy that made the rest of us serious ground hog actors look bad.  He was schlock talent from the get-go and everyone knew it.