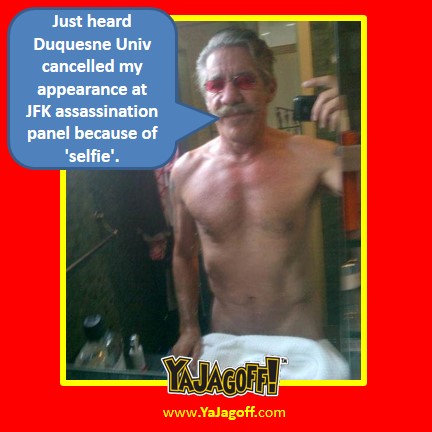 Duquesne University Wecht Institute is planning an academic panel about the Kennedy assassination as it’s 50 year anniversary comes around this October.  Because Geraldo was the first to air the Zapruder film, he had been invited to moderate the event.

But then, like many other self-important males who drink too much and own a smart phone, Geraldo tweeted a “selfie” pic of himself and then, like all of those who second guess themselves after being drunk with a smart phone in theirhands, apologized for the tweeted photo.  Well, the folks at Duquesne University have chosen to un-invite Geraldo from the October event because of his tweeted pic.  And, did Geraldo say to himself, “Ahhh .. yeah.. that WAS dumb of me to do what I did.  I probably should just accept the fact that some people think I am scum since I gave them ammunition to think as such.”

Duquesne’s cancellation of my JFK panel appearance is pretentious censorship Do students agree with administration? Am I banned for life?

Yes Geraldo.. the fact that you were a talking head when the Zapruder film was aired … (not that you shot it or discovered it) IS less important!!  The fact that YOU think that YOU are more important, or even relevant in 2013, is the kind of thinking that led you to taking the “Selfie” pic in the FIRST place!!!  And good try and trying to get the students engaged ins something.. again.. trying to make yourself relevant!

And by the way, your “selfie” pic seems to have a bit of a different look and hair color from your Twitter profile pic:

Hey Geraldo, you should thank Duquesne University for helping to make you relevant!  That’s what you REALLY want… to be talked about.. relevant when the facts are, you haven’t been relevant since the whole swing-and-a-miss BS on the Al Capone vault stuff!  Shut up and go back to your male-dancing gig at nursing homes, Ya Jagoff!!!