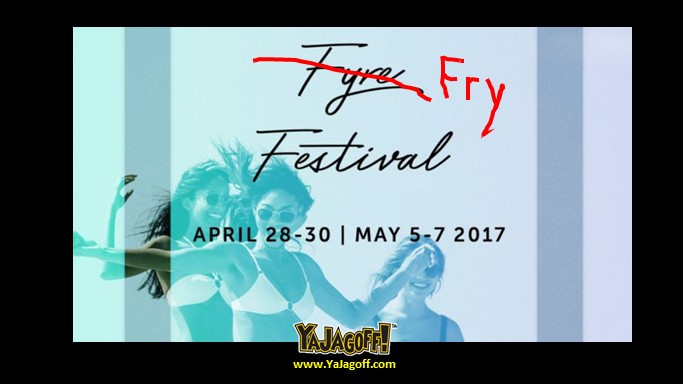 By now you’ve heard about the horrendous publicly-shamed failure of the 2017 Fyre Festival.  It was supposed to be a:

“dreamy, deluxe, and highly Instagrammable music-festival experience that would take place over two weekends in the Bahamas, on a purportedly private island called Fyre Cay. The organizers—including Billy McFarland, the founder of the troubled millennial-élite social club Magnises—promised attendees buried treasure, yacht parties, and concierge packages that cost up to fifty thousand dollars per person. Models including Bella Hadid, Emily Ratajkowski, and Kendall Jenner promoted the festival with a series of swimsuit shots on social media; Ja Rule would serve as host. The lineup, which eventually included Blink-182, Major Lazer, and Migos, hadn’t yet been solidified, but the festival sold out quickly nonetheless.” Full Story in The New Yorker

People showed up and were forced to sleep in tents, eat cheese sandwiches and, when they wanted to go home, were stuck in the airport because there were no flights out!

Why this thing failed?