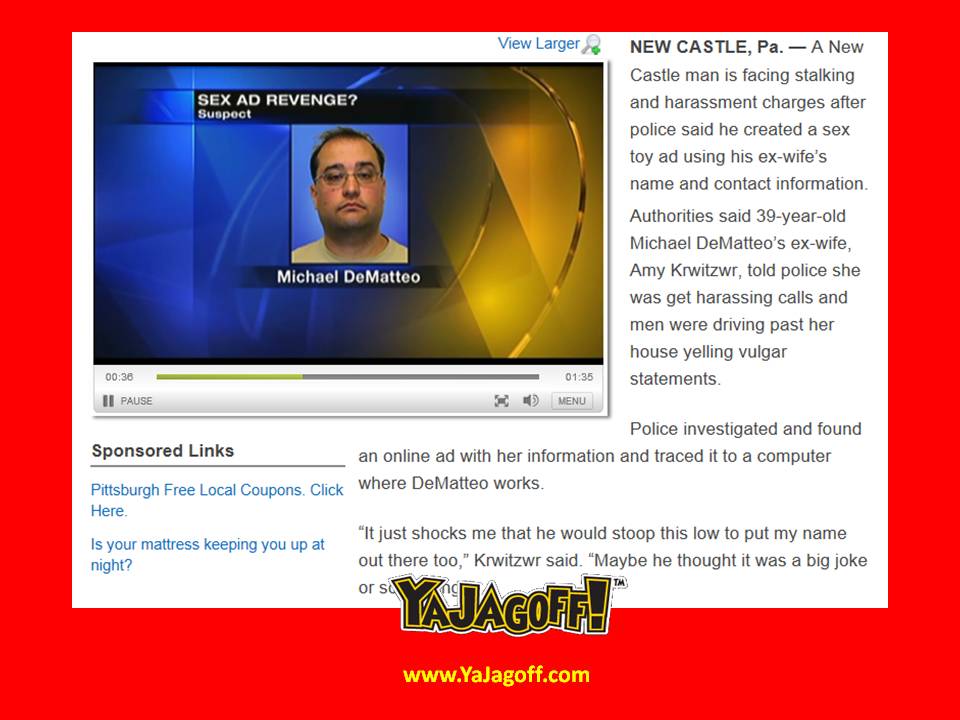 Something, yes SOMETHING had to come accross the Jagoff news desk to make us forget that little hockey game last night. And BOOM!  here comes WPXI strolling into our night Facebook feed.  And this story really DOES make you say, “Get the hell outta here!”

A 39- year old guy, Michael DeMatteo, from New Castle, PA who has been divorced from his wife for 10 years, yes, 10 years, was caught putting his ex-wife’s pic on some fake sex toy ad.  But wait!  He put her address and phone number on the ad too… ALLEGEDLY!  The next thing ya know, the ex-wife, of 10 years, is getting harassed by knuckleheads who were responding to the ad.  We guess the crayon marks on the ads were NOT a clue that these things were FAKE!

Wait!!!  Didn’t everyone do that in grade school?

We started to wonder, if he got REALLY mad, if he threw spit balls at his ex-wife’s current husband or if he saw him carrying books in a library hallway and shoved the books out his arms from behind or gave him a wedgie in the freezer section of the grocery store? (Maybe Michael only did THOSE things when he was younger, more immature….like, when he was 38-and-a-half.)

Another crucial point:  Michael did this all on his WORK COMPUTER!!!!

Did he not read the company policy manual about “emails are not private” or has he NOT paid attention to all of this cyber-investigation stuff at Pitt where it seems that tracking the sources of emails is about as easy as predicting the weather in San Diego, CA?

The boys in the slammer are gonna have a field day with Michael and his ads.  We’re pretty sure SOMEONE’s been practicing PhotoShop on the prison library computers!

Michael, thanks for making our night.  The next time you’re looking at giving payback, maybe you can steal some of the company letterhead, then hand write a bunch of “Your momma’s sooo fat” insults on it WITH YOUR LEFT HAND,  so nobody knows it’s you!  And don’t forget to end with with, “P.S., you’re also the biggest poo-poo head that ever walked this earth.”

In the meantime, we suggest your ex-wife use YOUR name in the following press release statement: Michael DeMatteo, from New Castle, PA – Western Pennsylvania’s “Cleveland Browns” Fan Of The Year, has become the proud spokesman for the new Active Adult Diapers that protect your outerwear when those random LEAKS occur and Trojan’s new MINI-condoms.” Let’s see how THAT works for YOUR dating life, Ya Jagoff!!!