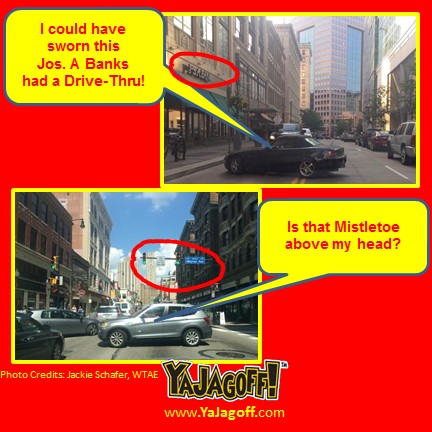 Yeah! A Two-fer special from our bud Jackie.

Two Block-blockers in two weeks. Seems she should get a prize for this but, we’re cheaper than your Uncle Stush who used to scotch-tape  a dollar’s worth of nickles to the inside of your birthday card up until your 13th birthday.

Is this real life @YaJagoff

This is what we call a #cluster and a #jagoff

Are we on the Kennywood Bumper cars?   Is the guy in the top pic a 6-year old that doesn’t realize that, if you turn the wheel the entire way to the left or right the car goes into reverse?  Is the car in the second pic a 14-year old boy friend/girl friend couple in matching sailor hats with their names on them where the male is trying to look “Doe” low-riding and just wants to sit there and get hit to see his girlfriend freak out?

Nope!  These are just people who believe THEIR life is more important than everyone else who’s on the road.  Because, as you know, sitting through the next red light makes a difference in you getting to the office 98-seconds faster than if you would have sat through the light!

I go back to the the original thought.  If we had cops at these intersections, we could fund the City’s debt and pay off both stadiums and the Consol Energy Center.

Seriously though, are you  the same people that stand in that critical space at the grocery store, the space between the end of the aisle and the cashiers, talking to your friends?  Are you all middle-children-syndrome people looking for attention?

Get outta the way Ya Jagoffs!!!

Huuuuuuge thanks to Jackie Schafer of WTAE for being our Honorary Jagoff Catcher today.