If and when the Pirates trade Andrew McCutchen, Bob Nutting will reclaim his role as the most despised man in the city. Until then, the person or persons that nobody can stand, is whoever is giving the weather forecast.

“It won’t be a total washout.”

You know what that means don’t you? It’s going to be a total washout.

“It won’t be raining at all times.”

“Oh yeah Nostradamus, what time won’t it be raining? I’d like to know when I can light the grill.”

The grass is still growing like it does in April. I swear, the other day when I was done cutting it I heard it say,

“See you day after tomorrow.”

There was an ad on television the other night for some medication, I don’t know what it was. Anyway, it showed a guy dancing as he pushed his lawn mower. My wife said,

“Why don’t you dance when you mow the lawn?”

“That’s what I’ll be doing right before they take me away.”

“He was fine at the beginning of summer. Then, each time he cut the grass a little piece of his mind slipped away until he finally snapped.”

The constant rain has also brought on more than its share of flooding. Not only people’s homes but McKnight Road turns into the McKnight River and Saw Mill Run Boulevard becomes Saw Mill Run Lake. People can’t get where they’re going and cars are being ruined.

Then, an idea struck me. Out of necessity, comes innovation. I was downtown and I spotted one of the “Just Ducky Tours” going by. If you’re not familiar, these are amphibious vehicles that tour through the city and then end on the river. I’m thinking, why can’t the average person own one of these vehicles? You sure as hell wouldn’t be concerned about flooded roads driving one of those babies. 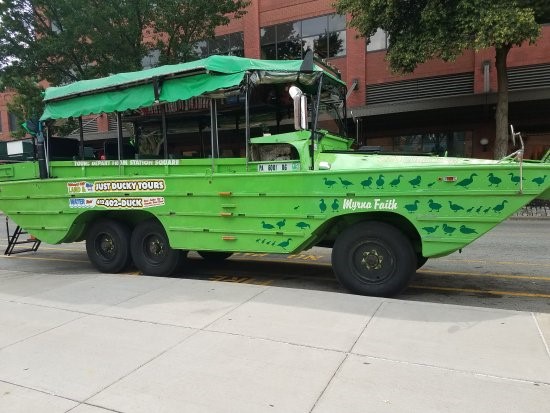 Yeah, I know what you’re saying,

This is the lowest gas prices have been in the summer in years. The extra gas will be worth it when you look at all the advantages. Tired of sitting in Route 65 construction gridlock? You have an alternate road. It’s called the Ohio River!

Maybe you’re a pretentious jerk and need people to pay attention to you. Yeah, you pull into the Giant Eagle parking lot driving a BMW convertible, a few heads will turn. But, if you drive in there behind the wheel of a Ducky, everybody is staring at you.

I was thinking about what to call my dealership. “John Knight’s Ducky” sounds either like I’m doing well or people that know me will think I’m being a sarcastic ass. I need something to attract attention. That’s why I came up with, “Honest John’s Big Ducky.” Because,

“You can’t go wrong with Honest John!” and “Big deals on Big Ducky’s”

The ads practically write themselves.

Yes, Yuck. What did you think I was going to say? What’s wrong with you?

You don’t even have to bring a trade in. Our policy is,

“We don’t care if you don’t give a truck. You’ll drive out of here in a brand new Duck…ey.

So what are you waiting for? Get on down to “Honest John’s” and ask him to show you his big Ducky.