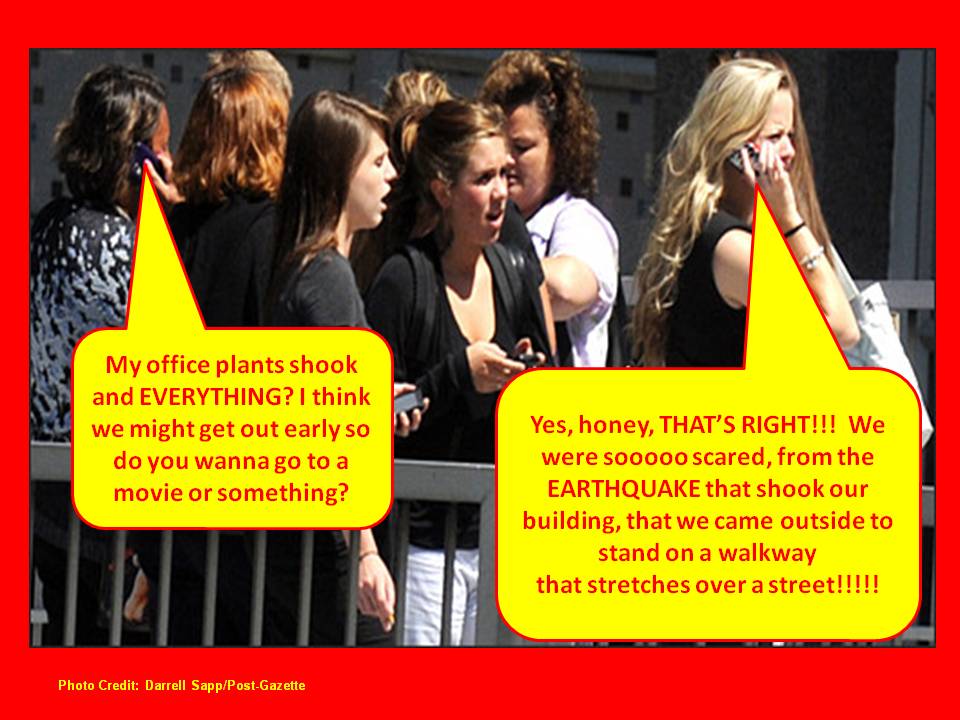 *  The shock was felt in MANY places, including our beloved City of Pittsburgh.  SIGNIFICANT!

*  Shaking buildings, rolling ground under your feet, feeling like your standing on top of a train while you’re at home, shaking work plants and blinds.  SIGNIFICANT and SCARY (cuz we don’t get those very much – basically NEVER)

*  These authors didn’t feel it and we are REALLY ticked!  (Soooooo ticked about missing it that we tweeted the Carnegie Science Center to see if we could rush over and get a free ride in their earthquake simulator machine just so we could get on Facebook and Twitter and fit in.)

The photo above from the Post-Gazette shows people who evacuated their shaking building to go stand on a meek, old pedestrian walkway that stretches over the downtown section of the Boulevard of the Allies.  Whatever happened to the doorway and bathtub rules of an earthquake?  They’re in EVERY movie!!!!!!

Vince Sims, respected reporter of from WPXI showed some video footage of damage in various cities like DC then, at the 4:10 mark, he cuts in video footage from OUR area, that a local viewer took, of the water wiggling in their fish tank (click here for story).  Is that all we got???  That’s cheezier than the stick-a-ruler-in-the-snow trick.

OK, so once again, YES this was scary.  Yes this was news, ESPECIALLY on a day when the Steelers aren’t playing or getting in trouble and the Pirates are no longer in the hunt, Sid Crosby hasn’t returned to the Penguins and the Mayor was actually IN TOWN when this “mageddon” occurred.

But, SETTLE DOWN!  The same people that wanted to go home early because their work plants shook are the same people that watch out the window during work and, as soon as they see a midday snowfall, call the boss and ask, “Are you letting us out early today so that we don’t get stuck here over night?”  You know, the same people that take off work because it’s too cold for their kids to go to school but then take the kids out sled riding all day!

If you legit damage, we feel bad for you.  But, if you’re one of those that called the insurance aduster and asked them to cover 17 new windows in your house because one of your grandmother’s wedding photos fell off the wall during “Earthquake-mageddon” and the glass broke, PLEASE be sensitive to those of us less fortunate Pittsburghers,  that DID NOT get to experience history, Ya Jagoffs!!!

SECRET NOTE:  Rumor has it that there WASN’T really an earthquake in Pittsburgh, it was simply the Batman movie trying to get some real-life footage of “total panic” by setting off underground charges since they weren’t allowed to blow up the Civic Arena while they were here!!!

In this article: Earthquake, Pittsbrgh