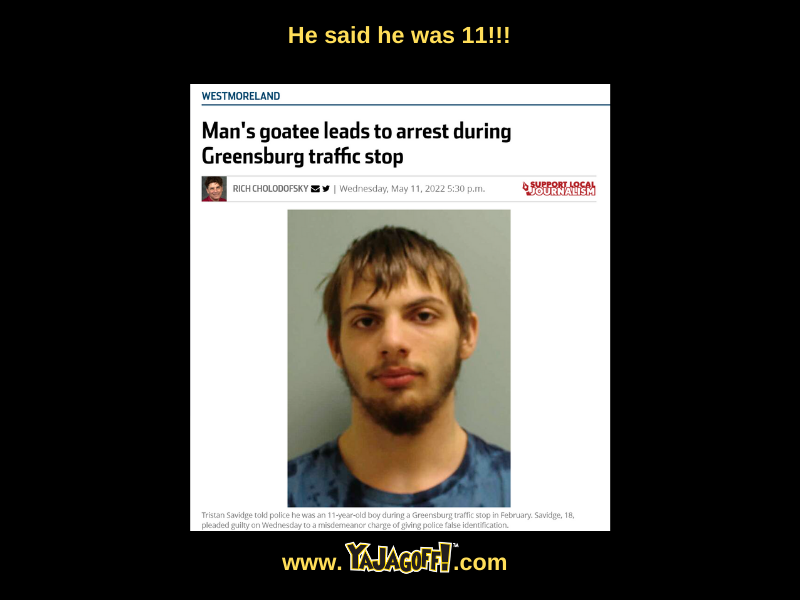 This is the stuff that makes us wonder but also helps us keep the blog fresh.  See the excerpts from the TribLive story below.

During a traffic stop, police thought that the recognized the passenger.

“Police said the man initially insisted he was 11-year-old named Billy Irwin and gave multiple dates of birth. After a brief investigation, police ultimately learned the man before them was actually an 18-year-old runaway from an Oil City juvenile detention center facility.”

Even the judge said, “Do you think the goatee wouldn’t have tipped them off?”

RIGHT!  Dude, isn’t the first rule of “escaping” to change your appearance.. like.. clothes, hat, shoes, haircut and…shave off that Scooby-Doo-Shaggy-like beard!  And isn’t rule #2.. or at least in the top ten, do have your birthday math ready to go?  Jeeezuz.. those of us that used fake IDs have known that for years!

Well, 11 year old Billy Irwin, the next time you try to escape, you might want to fake that your 65 years old and then, the first thing you do, is run to RiteAid and get the senior citizen discount on some cheap razors…shave.. and THEN try to sell yourself as an 11-ish year old, YaJagoff!