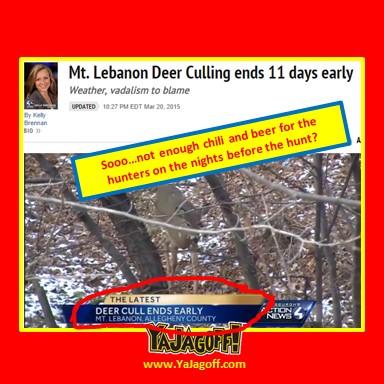 Well, the controversial deer culling of Mount Lebanon has ended.  See story by WTAE Kelly Brennan  This project has brought a level of controversy to the swanky town of Mount Lebanon not seen since Michelle Obama sported a sleeveless TJ Maxx dress in public.

It has been ugly…

people likening the deer culling to Nazi Germany (not kidding)

in a true sign of wild animal solidarity, turkeys causing a motorcyclist to get hurt due to them protesting in the middle of a road.

There has been jagoffery on both sides… someone seen on video sneaking in to help the deer escape from the corrals and now the guy in charge of shooting the deer, admits to WTAE that, at one point, it took 11 shots to the head to kill 3 deer due to faulty ammunition and that now it’s too warm to carry on the project.

Enter YaJagoff.com because no matter which side of this deer-culling-circus you’re on, the entire thing has hit a 9.8 on the silly-ass-sh$t scale.

With all of the controversy surrounding this project, you’d think that the hunter dudes and dudettes would have made sure everything, including the ammo, was ready with NASA-Navy-Seal level precision preparation. But nope…faulty ammunition excuse….sheeesh!  Thank GAWD they didn’t use the ol’ “Deer had harder skulls than we had anticipated due to running into so many Mt. Lebanon vehicles” excuse.

Well, our SJU (Special Jagoff Unit) looked into this and here is what WE found as potential reasons why the Mount Lebanon deer culling failed.

1)  We established that there are no, zero, nunya, zippo empty beer cans around where the deer hunters were prepping. Huge mistake.

2) There is no evidence that any of the hunters ate a minimum of 6 1/2 quarts of re-heated chili prior to the hunts. Bad juju.

3)  All of the hunters were honest with their spouses about how long they needed to be away to hunt the deer.  These people can’t POSSIBLY be real deer hunters.

4) Not enough fox urine on the hunters clothes and boots.

5) The deer are more difficult to cull in warmer weather when they have more options for food….somehow, the professional hunters were not aware that it starts to warm up toward the end of March.  They all must have only visited Pittsburgh once… during the Blizzard of 1993 and assumed it’s always like that.

So, professional hunter dudes and dudettes..the closest I ever got to going deer hunting was when my ex-father-in-law took me and asked me to wear a brown jump suit and an antler hat.  Also, I know/care ZERO about hunting ANYTHING other than a serious bargain on hockey tape!  I get a chill just walking through the freezer section of the grocery store to get the meat that is cleaned and ready to cook let alone sitting outside in the freezing cold TRYING to catch some.

But, what I DO know, if your group was hired to do this in the midst of all of that controversy, don’t ya think ya woulda had the details down a little better to get this done right, Ya Jagoffs?

Thanks to WTAE @Kbrennan_WTAE for the story…we consider her to be an Honorary Jagoff Catcher!