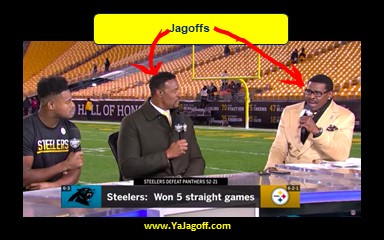 John was out playing hockey while a history-making football game was going on? Jeezuz.. thank GAWD for Rachael being tuned in to real life!

He is not 22 years-old yet and he is a household name in the world of football, a social media maverick, and now you can add ‘stay the course interviewer’ to his list of credentials.

#19, might I also add one of my favorite interviews of all time, sat among the panel who started out asking him simply about the record-setting 52-21 win.  He grinned and eloquently answered the ‘how did it feel’ type questions. Then the reporters start with the oldest play in the reporters’ playbook, the sneak attack questions.  They kind of look at each other, awkwardly squirm in their seats and under their breath a play is called, like sneak-up 10, ready…go!

Somehow amidst Roethlisberger throwing for five touchdowns, a defensive touchdown, and a breaking a record for three touchdowns scored in a certain amount of time, the Lev Bell question comes up.  What NFL Network peeps? Why?  There was more than enough material there and I don’t know football jargon!

JuJu did not budge.  He was poised and prepped.  He bobbed and weaved.  He is JuJu and he is LIT.  One of the commentators mentioned a tweet from Lev Bell during the game about JuJu being special.  JuJu explained that it was a nice mention and he didn’t know of that comment and the commentator calls him out and explains that JuJu is the best at the social media game and how did he not know?

Now, I am no analyst, I multi-task and lose track of time at times, but I was among millions of others watching the game—and I think JuJu was IN THE GAME!  How would he know what was said about him during a game? Lev Bell wasn’t at the game, again the game that will be talked about for days.  A game that warranted the Steelers some days off according to JuJu.  So stick to the game at hand commentators, don’t sneak attack ways to find out thoughts on Lev Bell, especially not with JuJu.  He is LIT and he will win.  Stick to the situation at hand NFL Network commentators, ya JuJu question asking jagoffs!