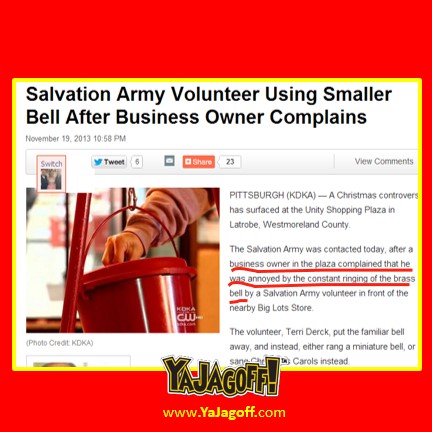 Yep… you read that right!!  A business owner was annoyed by the Salvation Army bell ringing.

The Salvation Army was contacted today, after a business owner in the plaza complained that he was annoyed by the constant ringing of the brass bell by a Salvation Army volunteer in front of the nearby Big Lots Store.

Really?  That’s like saying you’re annoyed by the radio stations that have already gone 100% Christmas Music Format.  Wait…. I’m annoyed by that so its not a good example.  But being offended by the Sally-bell ringing?

OK, I’ll give ya that fact that not all of their trumpet players are Louis Armstrong cadets but, even those people aren’t ANNOYING.  You just simply appreciate the fact that they are standing out in the cold trying to be that lucky bucket operator that someone sneaks up and drops a family heirloom diamond ring into.  You also simply appreciate that there’s no tongue or lip meat stuck to the trumpet mouthpiece when its REALLY cold out.  But ANNOYED?

Wouldn’t it be fun to take the “dinger” out of the bell, dress as zombie Sally-bell ringer and stand in front of this guy’s business window, shaking a non-ringing bell… while staring with a “Is THIS quiet enough for you?” wide-eyed look into his store!  And then maybe get a whole bunch of zombie Sally-bell ringers and do a silent hand-bell choir.  I guarantee he’ll be freaked out enough to donate AND ask for the bells to start again!

Hey Mr. Chairperson of the BITTER BUSINESS BUREAU.. (see how I did that there? Top shelf humor here), maybe instead of saying you were so ANNOYED by the bell volunteer-fundraising bell ringing and making them stop, you could have dropped $2,000 into the bucket and said, “ok.. you’re good for a couple of hours… come on inside, take the load off of your feet, take your coat off, warm up and have a cup of coffee,” Ya Jagoff!!!!!

Thanks to @douglasderda for forwarding this story over and being our Honorary Jagoff Catcher!  Much appreciated.