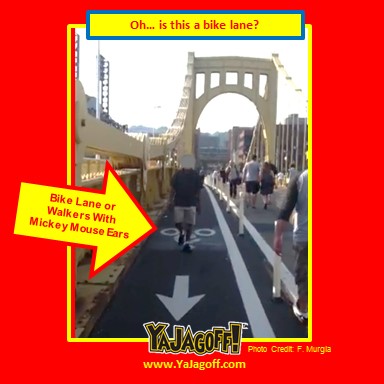 So bike lanes lead to to people using bikes more often but then again, they can also lead to bike lane jagoffery.

To be honest, the whole bike lane thing with Mayor Peduto perplexes me.  Reason being, the Mayor is an ice hockey player and, as a fellow ice hockey player, I would have thought the hockey lobby would have had more power with him to prioritize year-round ice skating lanes.  Little frozen tracks all over the City.  But… nope!

See the video below of the Jagoffery captured as it happened.

I mean, at least do some kind of air-bike routine and put one of those little thumb bells on your wrist if you’re gonna be in that lane, Ya Jagoff!

Thanks to Frank Murgia for the video and for being our Honorary Jagoff Catcher.