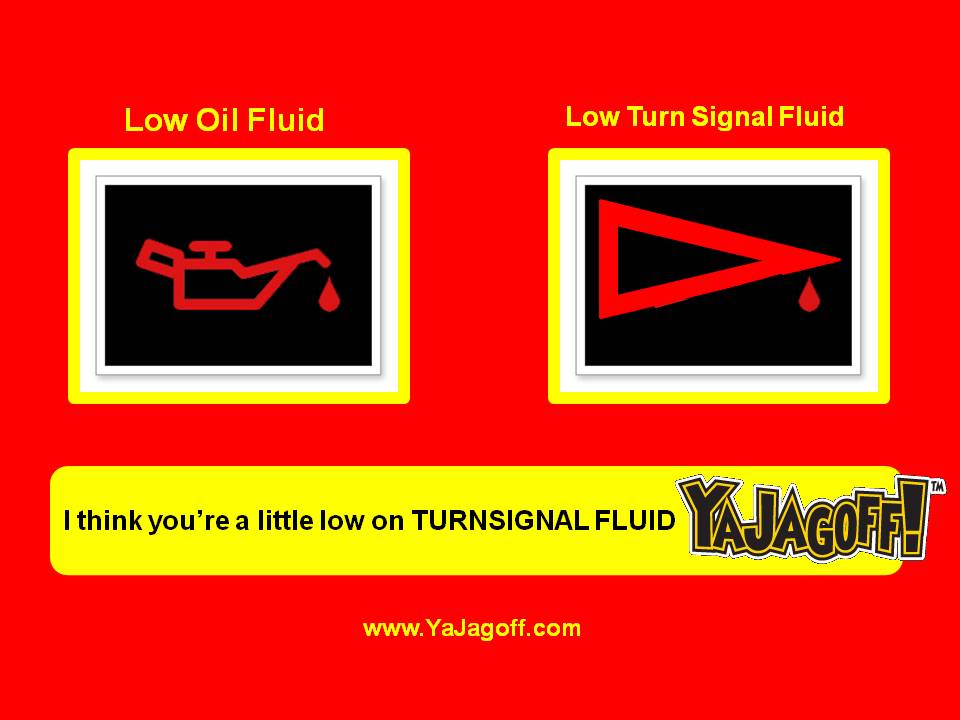 Ya know when you’re sitting at an intersection waiting to pull out and another driver comes down the street perpendicular to you towards the intersection (like he’s gonna cross in front of you), so you decide to NOT to pull out, and then that driver turns BEFORE they get to you!  Or, your driving behind someone yakin’ on their phone, they start to slow down, you have no idea why, they make a turn and THEN turn on their turn signal!

You may say, “Big Deal,” or “Lighten up Francis!” it’s only a turn signal!  Sure, this may seem petty but, not using a turn signal is more about laziness, selfishness and a lack of respect for others than anything else.  Not using a turn signal because you’re trying to make the turn without putting down your phone AND your Sweet Tea is, well… ya know!

Haaaa.. we like the use of the vernacular Dr. Dave!  But we think we found the problem, turns signals are failing because people are not replacing their TURN SIGNAL FLUID!!  They can’t afford it,  probably due to the economy, the war, the March hail storms and hurricanes, the recent G-20 Summit, the Batman Movie, the Tom Cruise movie activity AND gas prices!!!!

Here’s our recommendation to avoid the frustration with non-signalers:  make everyone’s license plate their TEXT MESSAGE ADDRESS!!! Then you can type, “Hey KRG-345, I think U R a little low on TURN SIGNAL FLUID, YA JAGOFF!!!”

We posted this note by Dr. Dave for two reasons:  It made sense AND it’s still Breast Cancer Awareness Month and he would like you all to go LIKE the Young Women’s Breast Cancer Awarness Foundation Facebook page!!!

Thanks to Dr. Dave for being our Jagoff Catcher of the day and for writing us instead of taking out the other drivers with a SHOVEL (see yesterday’s post.)