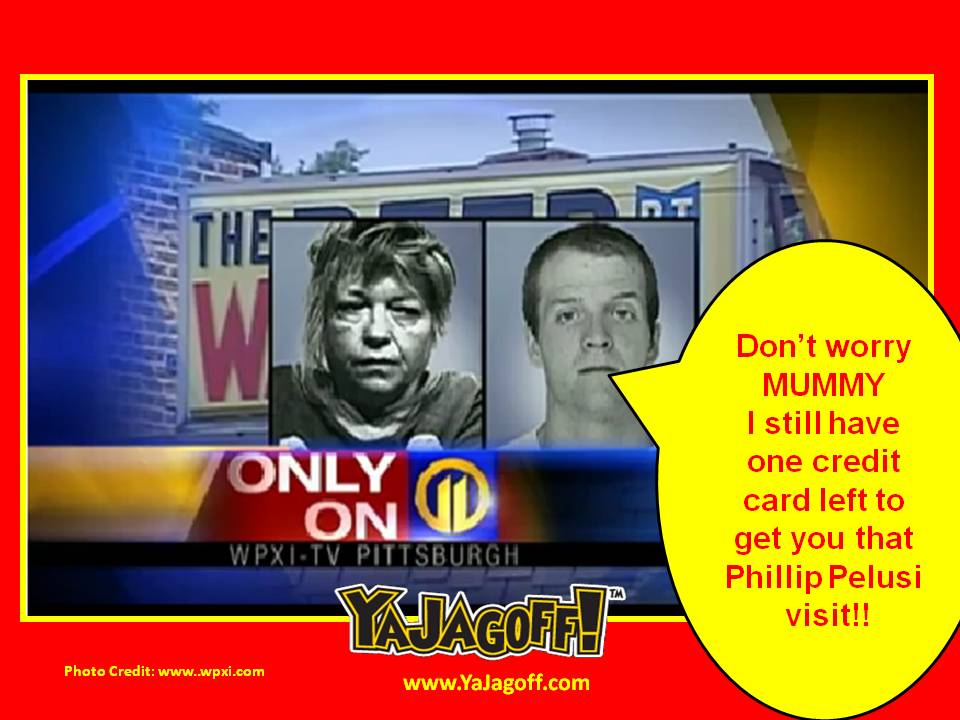 Does everyone one remember the father-daughter-tag-team-WWF showdown at PNC Park? (here’s our post about them) Well we found some a mother and son having a nice family day out this time.  A WPXI talks about a mother-son duo that went on a little Bonnie and Clyde run in Bridgeville (full story here).

Apparently the two stole a wallet from a Bridgeville restaurant and went on a little shopping spree with the credit card. Now not only are these folks downright Ja…..(well you know) but there also downright STOOOPID. Their little shopping spree consisted of beer, liquor and cigarettes. The credit card was used at the local Beer Warehouse, a State Liquor Store and K-Mart!

They weren’t even smart enough to go out and buy a yacht or season tickets to the Penguins games or those All-You-Can-Eat Buccos tickets where they can shove food in their drawers and eat for the next 2 weeks!

Imagine them in the slammer when someone asks “Whata ya in for?” and their reply is “I went to K-Mart and bought some smokes with a stolen credit card, (insert jail-type swear words here)!”

The next day the son kept going.  He smashed a window at a local business and stole a cash register (ahhhh mommy’s little boy!!) We can see the bumber sticker, “My Child Can Smash Steal Stuff Better Than You Honor Student ….but then again he’s 28.”

When police took the woman into custody they said she did not cooperate (surprise, surprise). She even tried to bite and kick the officers.  Guessing they should have got some chips and pretzels at K-Mart!  She eventually had to be tazed.

On the bright side, jail is a great place hold a Mother’s Day dinner. They’ve got great rates on dinner menus on food that the inmates make themselves.

Next time, you might want to consider a nice night of laser bowling or staying at home with a game of Gin Rummy, Ya Jagoffs!!!

In this article: Mother and Son accused of steeling credit cards, Wanda Balukas and her son Michael Tharp