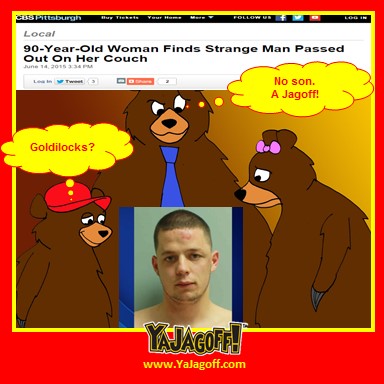 It seems my man in the picture, let’s call him Corey because that’s his name, wondered into the wrong house and fell asleep on the 90-year old woman’s couch.  And, like most of us, when he was awakened, mind you, not by the woman’s screams but by the police waking him up, he was grumpy and…. how about this word…cantankerous!

This leads me to a story:

Once upon a time, there was a guy named Corey. He went for a walk in the forest or some place like that around his little Westmoreland town of Youngwood . Pretty soon, he came upon a house. We’re not sure if he knocked but ALLEGEDLY he walked right in.

“This Strawberry-Pretzel-Pittsburgh-Jello Salad is too hot!” he ALLEGEDLY exclaimed.

So, he tasted the Strawberry-Pretzel-Pittsburgh-Jello Salad from the second Styrofoam picnic plate.

“This Strawberry-Pretzel-Pittsburgh-Jello Salad is too cold,” he ALLEGEDLY said.

So, he ALLEGEDLY tasted the last Styrofoam picnic plate of Strawberry-Pretzel-Pittsburgh-Jello Salad.

“Ahhh, this porridge is just right,” he ALLEGEDLY said happily as he ate it all up.

After he’d eaten the 90-year old woman’s picnic leftovers, he ALLEGEDLY decided he was feeling a little tired. So, he ALLEGEDLY walked into the living room where he saw three pieces of furniture covered in plastic. Corey ALLEGEDLY sat in the first chair to rest his feet.

“This plastic is to sticky,” he exclaimed.

So he sat in the second chair, ALLEGEDLY.

“This plastic is to, too!” he whined.

So he tried the 90-year old woman’s couch, ALLEGEDLY.

“Ahhh, this couch is just right,” he sighed and young Snorry-Corey fell asleep.

Eventually the 90-year old woman woke up… probably to pee.  But either way, she saw that someone had been eating her Strawberry-Pretzel-Pittsburgh-Jello Salad leftovers.  Then she saw Snorry-Corey sound asleep on her couch and called the cops.

(To 911) “Someone’s been sleeping on my couch and he’s still there!” exclaimed the 90-year old woman.

Just then, the cops came, and woke Snorry-Corey…it took them a while… and some restraining techniques but Snorry-Corry woke up and saw the 3 “bears” (using some old CB radio lingo there, ya know). In his defense, let he who likes getting rousted out of a hangover sleep, cast the first stone on being grumpy.  Snorry-Dorry did not jump and run back into the forest never to be heard from again. He was placed in a police car and a jail cell where he’s probably not near as comfortable sleeping as he was on the 90-year old woman’s couch.