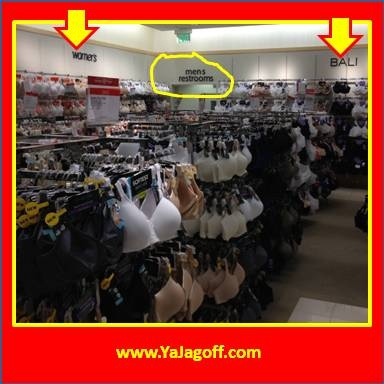 Really??????? A men’s restroom in the bra department? It took me a while to catch this thing. Then I read the accompanying text,

I’ve heard of Bali, Warner’s and Playtex brands, but I’m not familiar with Men’s Restroom brand!

Just in case you’re as slow on the uptake as I am, I applied the Jagoffestrator graphics.

Surely you’ve seen what men do at the mall when their honeys are Christmas shopping….they mope, hang out in the food court, sleep on the mall benches and pretend to be purchasing one of those $5000 massaging recliner chairs from the Brookstone store. The other half of the time they spy on the women that are coming out of the Victoria Secret store.

I guarantee this is THE busiest men’s restroom in the mall.

“Hey honey, I have to pee AGAIN! That damned coffee! I’m gonna use the restroom at Macy’s. It’s much cleaner. I’ll catch up with you later.”

Hey Macy’s of Nashville, I might suggest moving the bra department away from the men’s restroom.

But, then again, I’m afraid you could do worse, like putting the bra department next to the digital and video camera displays.

Nothing says “the Holidays” like shopping at Macy’s. And nothing says “hey creepy old man here’s a great place for you to be even MORE creepy” like a Men’s Restroom in the far corner of a place where women are trying on underwear, ya jagoffs!

Thanks to Dirty Kurty for being our Honorary Jagoff Catcher Special Nashville Correspondent today.