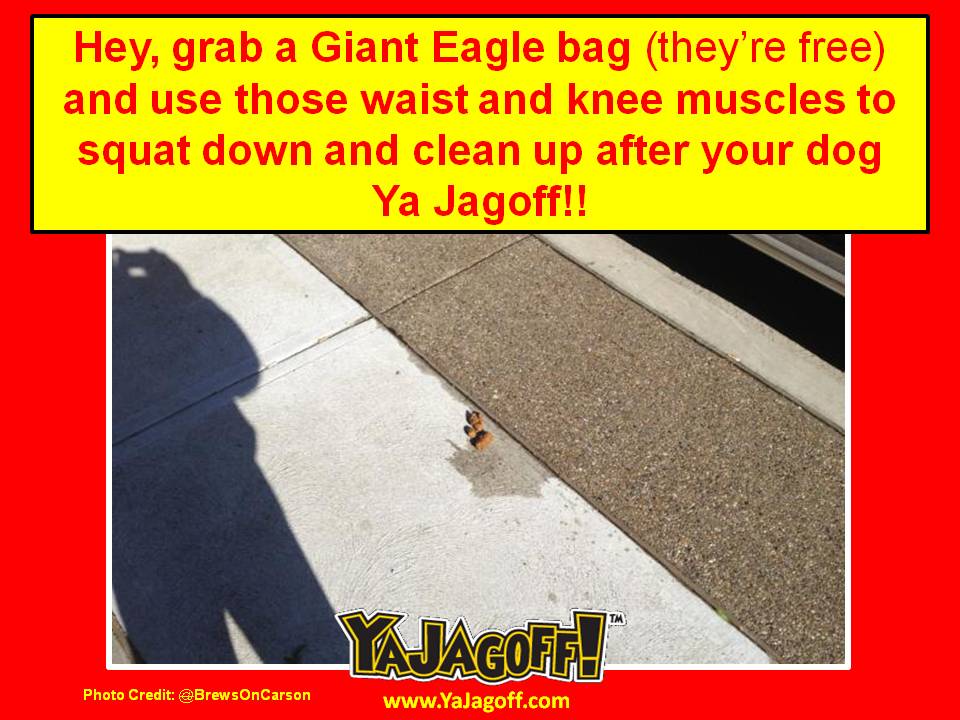 WOW!  We have been waiting for a chance to post this type of Pet Owner Jagoff for nearly FOREVER!!  We just never quite had the proof… or the POOP!!

“Hey Jagoff, just because I’m the neighborhood dog lover does NOT mean I like it when you let your Jagoff dog poop in my yard!”

But we didn’t have an actual incident to put with it.

Then, our dear “friend in sarcasm” Richard D. (one of our first 10 followers EVER on our email list) sent us this pic of a sign he has in his yard. 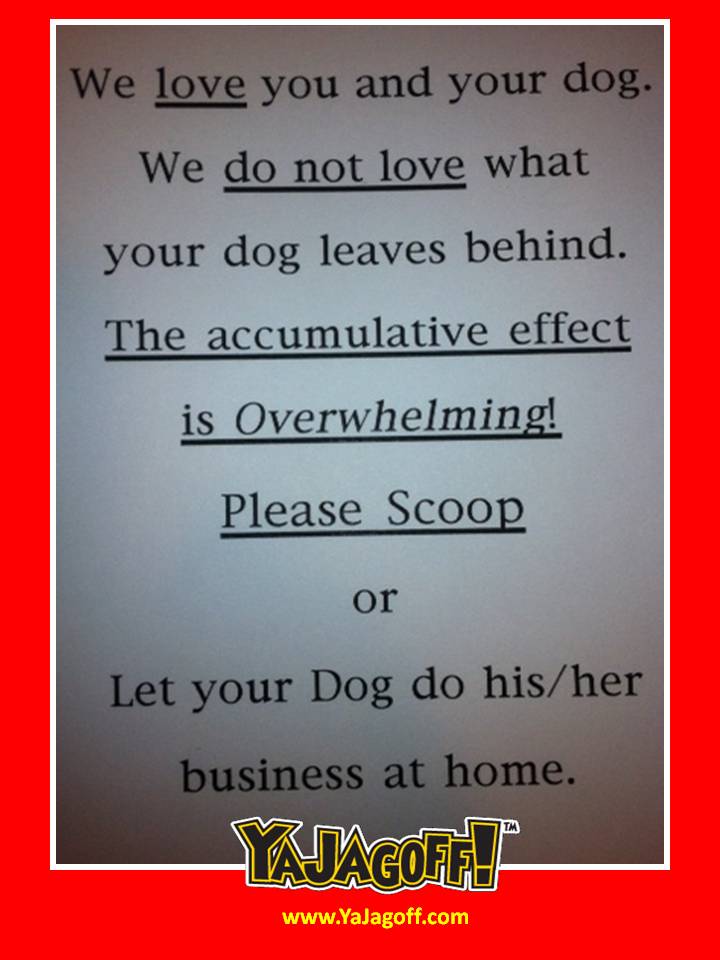 But we didn’t have an actual incident to put with it either.

Then it happened……. a Twitter-er complained about a dog doing their business IN FRONT of THEIR business on the South Side. The tweet said:

Watching a dog take a dump on the sidewalk and having the owner do nothing makes my blood boil. Love dogs, hate people.

And the BEST part is, someone sees the Tweet and says, “You gotta get a pic for @YaJagoff!”

We NOW have an actual POOP incident to post!

Seems that this happened right in front of the new Buddy’s Brews On Carson.  The pic at the top is what the owner didn’t pick up after his dog let out some gas WITH LUMPS!

Hey Mr. Doo-doo-drop Inn!  Betchin’ that you’re one of those that, when you get caught, you say, “Oh my GOSH!!!  I swear I had one of those bags in my pocket when I left the house!” And by the way, who in theeeeee hell makes their dog poop on cement???  No class if you don’t give’em some GRASS!!

Here’s what we think, if you’re caught, the penalty phase should include walking all of the dogs at the Humane Society and Animal Rescue League Shelter, every day for one week…but you have to walk behind them with your bare hand at their bottom ready to catch the droppings!

But wait!  We still have to worry about how you’ll learn to keep the neighborhood clean sooooooo..we think your punishment should also include you working a Friday and Saturday early morning where you have to walk up and down both sides of Carson Street and EAT every small token of dropped food that you find on the ground.  (And you don’t get any beverages from Buddy’s to wash it down!)

Finally, we’re gonna figure out where YOU live.  And then we’re gonna walk our pet COW by your house, right after we fed her Taco Bell, 4 Mike and Tony’s gyros, 8 trays of Chicken-on-a-Stick,  and 12 Primanti Sandwiches.  Hoping that you know how to activite the local hazmat crews, Ya Jagoff!!!!

Special thanks to @BrewsOnCarson , Sue Donaldson from Facebook, “Original Ten Email Follower” Richard D.  and @shadow for combining efforts on this as Honorary Jagoff Catchers!!!

Hey, it’s almost BEACH TIME.. Myrtle, Outerbanks, Jersey Shore.. don’t forget a beach chair that CLEARLY states you’re from Pittsburgh and that this is YOUR SEAT!!!