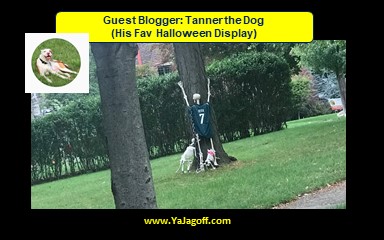 Hey?  I’m Tanner. That’s my Instagram pic in the corner. I am Rachael’s dog. She is my “dog mom.”   She says she doesn’t like me but I know that she cares deep down inside. Her and John were busy this weekend so I thought I try and score some points by NOT @#$@ing on the carpet and by writing a guest blog for them.

A bark-out to my human bro, Roman, for taking this pic for me since I’m the only one of the fam that doesn’t have some kind of smart phone.  I just have silly chew toys that taste like old rubber.

Anyway, not much to say about the photo, right? It’s awesome.

I only know a little bit about the dog-torturing-Jag Michael Vick “sitch.” To be honest, I really don’t understand 100% of the words that people say about him but he sounds mean. (I really only understand the words SIT, STAY, WALK, PEANUT BUTTER, TREAT and PAW.. which means TREAT eventually). Hold on one minute…..(fart)….heee!  Whew!!  That smelled like sausage.. time for me to get up and move and look at my butt while I walk away.

Anyway, when Vick was playing football, I would hope that the other teams’ would bite him, stick their finger in his eye through his face mask AND give him one of those “I just ate some grass and some of my old poop” dog burps right in his face while they were on top of him.

Here’s the thing… I love this Halloween decoration that Roman saw somewhere around town. I have no idea where it was and neither does my directionally-challenged dog mom. Hope you like Vick-Pic too!

WAIT!  While I have the bully pulpit, I have to say one more thing, I don’t know who’s test-tasting the stuff but “beef flavored” dog food is BOGUS!!  It tastes NOTHING like the steak scraps some un-named kids have sneaked to me under the table a few times, Ya Jagoffs.