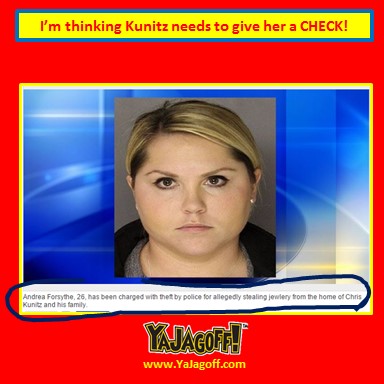 This lady is not so happy that Pens winger Chris Kunitz might be home a little early from the playoffs.

You can read the story on WPXI.com but here are the ALLEGED details:

She was the Kunitz’ nanny

She took some expensive earrings from Mrs. Kunitz and supposedly hocked them

She also ran a breast cancer fundraiser website for herself but… guess what… yeppir.. she didn’t even have breast cancer

Poor Kuny… one of the nicest guys on the roster.. having problems scoring and here’s this woman scoring with his personal stuff let alone, nanny-ing his kids.

Thank GAWD she wasn’t teaching the Kunitz kids how to play the game Operation.  I’m pretty sure she would have been having them do a real-life version where they remove their own organs and then she sells them.

At this point, Monopoly might be a good game to get used to… “GO DIRECTLY TO JAIL.. DO NOT PASS CONSOL ENERGY CENTER!”  Ya know, a good defense might be.. “I was gonna sell it to help Mario and Rutherford with the salary cap!”

Andrea…c’mon, at least smile for your mug shot.. I  mean.. there’s good news here.. you don’t have breast cancer!!!  By the way, with this kind of record, feel free to apply as a nanny of any on of the Flyers players