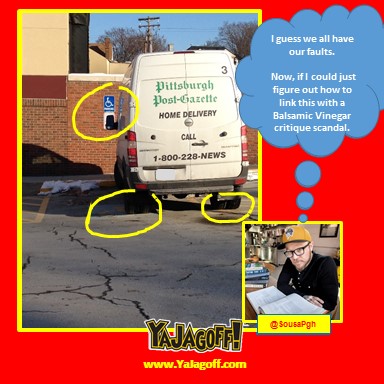 Normally, I stick with the silly, data-less, rah-rah Pittsburgh topics with a complete lack of objectivity on this blog so that we all have a place to get away from the seriousness of normal life.  But…

When tries to insinuate negativity about a local person trying to do good, especially a bud from the Rox or similar place where there were extra obstacles to overcome, it tics me off to the level of someone saying that you should NOT eat Mancini Bread and a pound of butter in one-to-one ratio or saying the Pierogies Plus ladies are use movie popcorn butter to cook their onions.

The PG, ran an article about Pittsburgh chef, Kevin Sousa regarding his personal and business dealings.  It was an article that he had agreed to and even offered access to private information under an agreement that an objective story be written.  He trusted the reporter, gave access and then became the result of an article of in negative dispersion.

I really hate to put a link to the article because it will help increase the website view numbers (which, from reading the article was clearly the goal and I guess that’s OK as long as you know that going in) but, if you haven’t seen it and want to make your own objective opinion, its here.

If you don’t want to read the article, here’s my summary:

PG writers,  Jonathan D. Silver and Melissa McCart appeared to do an “investigative” report on Chef Sousa.. someone trying to do good for himself, his family and the community,

NOTE: I whole-heartedly believe that, just because you appear to be “doing good for the community” doesn’t make one immune from being a Jagoff, i.e, go search John Rigas, Adelphia Cable, Coundersport and how many schools, library, hospital thingies  had his name on them

Kevin is a McKees Rocks kid that has done well.  Despite a troubled upbringing, he has opened, sold and closed some restaurants and has left a trail of financial issues all while making good things happen

There are some blah, blah, blah paragraphs trying to imply loose ends to imply potential improprieties or, at least cause those who support him to question his ethics and business practices.  They eluded to conclusions that weren’t necessarily connectable. (Is connectable a word?)

What the article does point out: clearly he’s made some bad decisions.  (Let me know if any of you would like to have an I-wanna-be-important-reporter reporter list and critique your bad decisions)

Kevin posted a rebuttal on his own website.  Admitting fault but pointing out the facts that were somehow left out of the miserably long article (notice miserably long does not necessarily equate to factually correct)

Public comments on the internet version of the story, contrary to the article’s authors’ opinions and supporting Chef Sousa, apparently were deleted by the PG, which, in public internet 101 school, every social media expert, including the Kardashians, tell you is poor form.

One final point, about the comments on the PG site.  Some took a Liberal vs Conservative battle approach saying that Kevin is a bleeding heart liberal that knows how to take money but doesn’t know how to pay it back.  There is no Liberal vs. Conservative argument when defining funding for entrepreneurs and the mistakes they make.  How many missteps with someone else’s money does a conservative like Donald Trump have before gets it right?

Ok… enough of this. Jonathan D. Silver and Melissa McCart, I hope you both get the award you were hoping for when you put this crush-those-that-build-their-own future diatribe together.  PG, here’s hoping that your ad revenues soar based on the number of hits all of Chef Sousa’s supporters gave you this weekend. Thanks for putting their comments back on the site.

To Kevin, only true entrepreneurs know the agony of the sleepless nights that self-starters, like you, go through so that others, their employees, can sleep at night knowing that a pay check is coming thanks to your creativity and perseverance.

OK…Melissa and John D, can ya just get back to your wheel house…investigating balsamic vinegars of the Pittsburgh area, Ya Jagoffs?

In full disclosure, I supported the Superior Motors Kickstarter project and have not second guessed that yet.

Thanks much to Paul S (Honorary Jagoff Catcher) for the pic of the PG truck in the Squirrel Hill Giant Eagle.