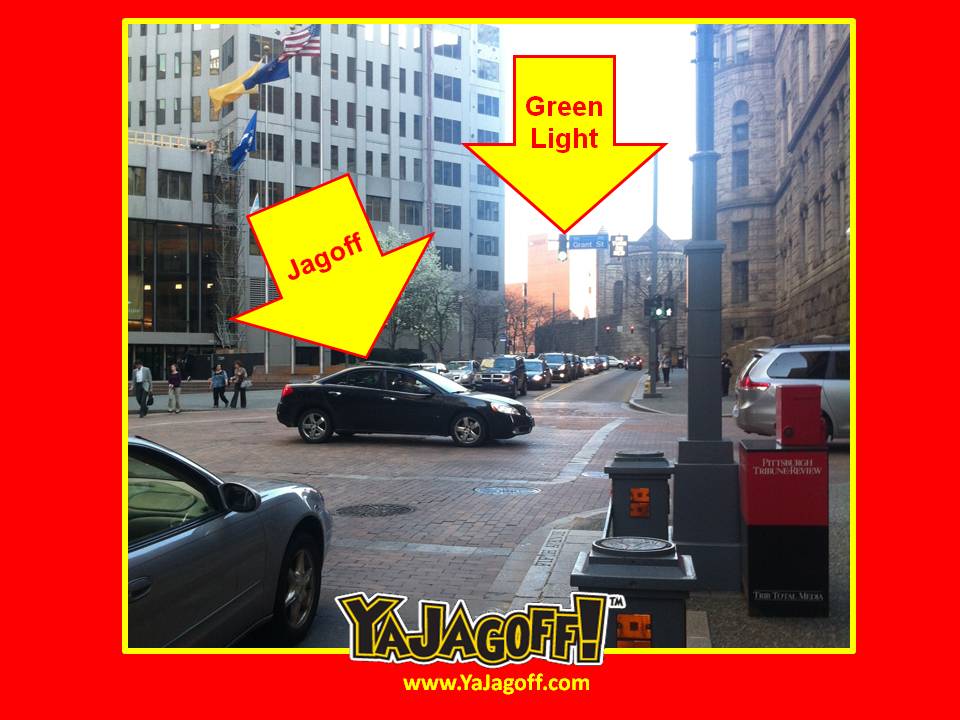 So there you are, making that early evening People-walking-in-front-of-you-while-they-are-texting-Cars-edging-their-way-in-without-turn-signals-Drivers-behind-you-beeping-incessantly-Phone-won’t-stop-ringing-since-you-left-the-office-Buses-stopping-at-the-only-green-light-in-the-last-15-minutes-to-pick-up-20-riders RELAXING RIDE HOME from your downtown office.  You finally get the green light and BOOM! there’s our guy in the photo above.  A “Block Blocker!”

Then what happens?  You pull forward acting like you’re gonna torpedo that car (and you REALLY want to) but you know your insurance agent would hate you if you did.  You give a horn, a dirty look, a palms-up-what-the-hell motion and……….. the “Block-Blocker” throws YOU a finger!  Ya know, because he/she just had to pull through the intersection on the opposing Yellow Light so that they could get home .02341543434590 seconds faster than everyone else.

For help on what to do with this, we looked up the rules to the Preschool game, “Red Light, Green Light:”

Step 1 Choose one player to be Red Light. He should stand about 25 yards from the other players, with his back turned to them.

Step 2 The other players should be lined up shoulder to shoulder behind him. Their goal is to try to get close enough to tap Red Light on the shoulder, but they can move only when he says, “Green Light.”

Step 3 To begin play, Red Light closes his eyes and yells, “Green Light!” Players then run at top speed toward him until he yells, “Red Light!” and turns around as fast as he can. The instant the other players hear “Red Light!” they must stop running. Anyone Red Light sees still moving when he turns around must return to the starting line.

“Anyone Red Light sees still moving when he turns around must return to the starting line.”

That would be so damned cool if, instead of giving out citations, the cops would make these drivers go all the way back to their parking spot and start their drive home all over!!!!!! Haaa.. can you imagine the tension of being told to go back??? It’s WORES than some piddly little $150 intersection-blocking ticket.

Sooooooooooooo, we have one question for this “Block Blocker.”  When you are sitting in the middle of an intersection blocking everyone else’s way home, and you’re drinking your lotta-crappa-lotta coffee, yakking on your phone and smoking, how do you determine what hand to use to throw up the middle finger, Ya Jagoff??