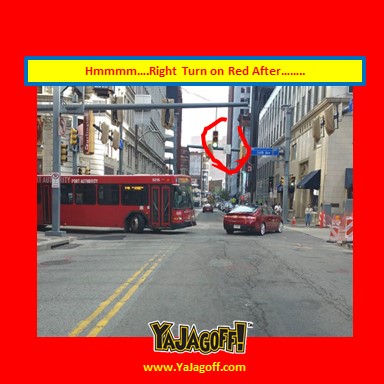 This was the message that was tagged on the Instagram photo:

He missed the big “stop here on red” sign

The good news in the situation above is, if they happen to bump into each other, they both have red paint so the damage won’t be all that noticeable.  Ya know.. not like those people that ding a tail-light and then put some kind of translucent red tape over it but it looks exactly like red scotch tape holding your car together.

Since we don’t know the gender of the bus driver we are about to be snarky to, let’s just call the driver PAT… you know.. like the old Saturday Night Live character (and of course I’m crafty enough to realize that PAT stand for Port Authority Transit).

So Pat of PAT, maybe we should go waaaaaay back to the basics.  What happens on the Red and Green lights.  We know this from the kids game, “Red Light/Green Light.”

In this game, one person plays the “stop light” and the rest try to touch him/her.

At the start, all the children form a line about 15 feet away from the stop light.

The stop light faces away from the line of kids and says “green light”. At this point the kids are allowed to move towards the stoplight.

At any point, the stop light may say “red light!” and turn around. If any of the kids are caught moving after this has occurred, have to go back to the start line.

Play resumes when the stop light turns back around and says “green light”.

The first player to touch the stop light wins the game and earns the right to be “stop light” for the next game.

Then, let’s say we’re all grown up and the red light situation becomes “real life” traffic.  It gets a teenie-weenie but more difficult because some places allow a Right Turn On Red…. AFTER you stop and make sure you’re not gonna hit another car, a person, an animal, whatever.  Just like the kid’s game, you ARE able to use a strategy of keep moving….. until you get CAUGHT that is! Get caught?  Get a penalty.

Now wouldn’t that have been cool if someone were to stop Pat of PAT’s bus and say, “sorry Pat… you and all over you riders, were caught so yinz all are gonna have to stay on the bus and go back to wherever you started this ride!”

Pat of PAT, one or two times of facing the wrath of angry riders… ones that are ON your bus vs. ones you pass up at bus stops…you’ll be sure to STOP ON RED every time, Ya Jagoff!!

Thanks to BestLightImages on Instagram for being our Honorary Jagoff Catcher today!