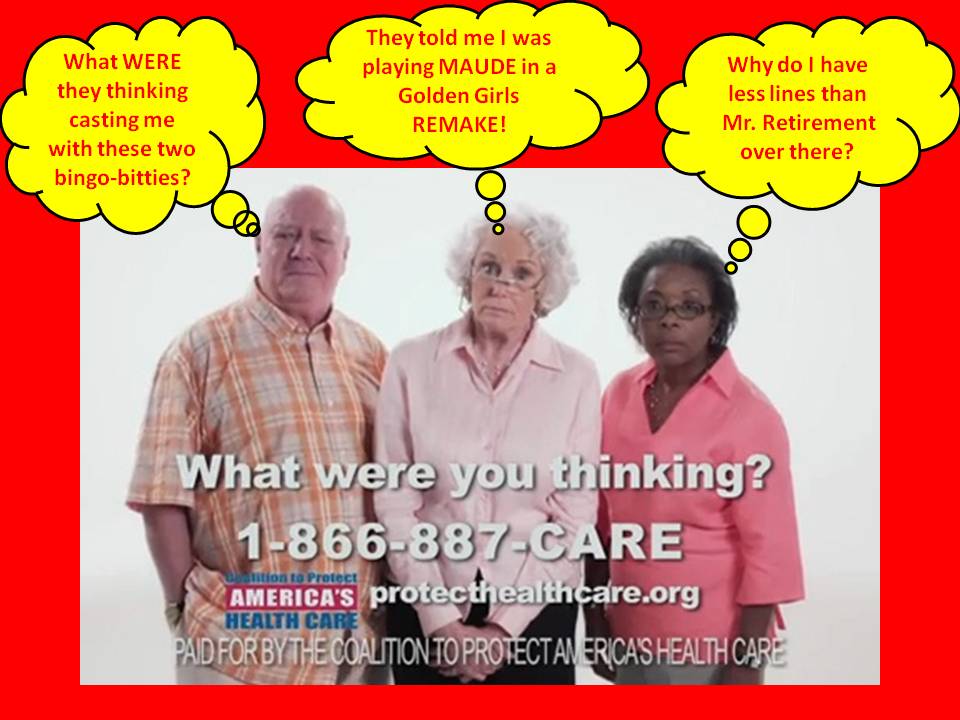 So what’s been the most IRRITATING thing the past week?

The Pirates slipping from first place after doing so good?

The media coverage of the debt ceiling “crisis?”

For us, it’s this commercial of GANGSTA senior citizens dressed in their Myrtle Beach Retirement clothes acting like they’re going to open up a can of whoop-ass on someone over the loss of healthcare.  If you haven’t seen this fine piece of work yet, take 60 seconds and do so by clicking here.   (It helps with the rest of the post.)

You gotta love the terrible acting…the Tony-Soprano-like line of “REAL bad idea!” or the real-tuff “Did you think we didn’t notice…blah, blah, blah.”

OK, so the healthcare issue is a big deal but is this commercial changing anyone’s mind?

To the senior actors: we’re glad your employed and, watching this, ALMOST scares us  enough that we think you’re gonna pull a ruler out and crack someone on the BEE-hind BUT are ya thinking anyone watches this commercial and wants to do ANYTHING other than hit the remote’s OFF button?

Hey, Coalition to Protect America’s Health Care, with one commercial, you have managed to get us to beg for the return of cheap political commercials that show fuzzy, scandalous photos of their opponent with their eyes bulging out of their head or explain how their opponent isn’t qualified to hold an office cuz he once used his bicycle to run over a picture of Jesus when he was 7 years old, or, EVEN WORSE,   those high-integrity car dealer commercials where they ride donkeys, pop balloons, scream and stomp like crazed maniacs  as they display their lack of self-pride just to hock some cars, YA JAGOFFS!

In this article: Coalition to Protect America's Healthcare, What Were You Thinking