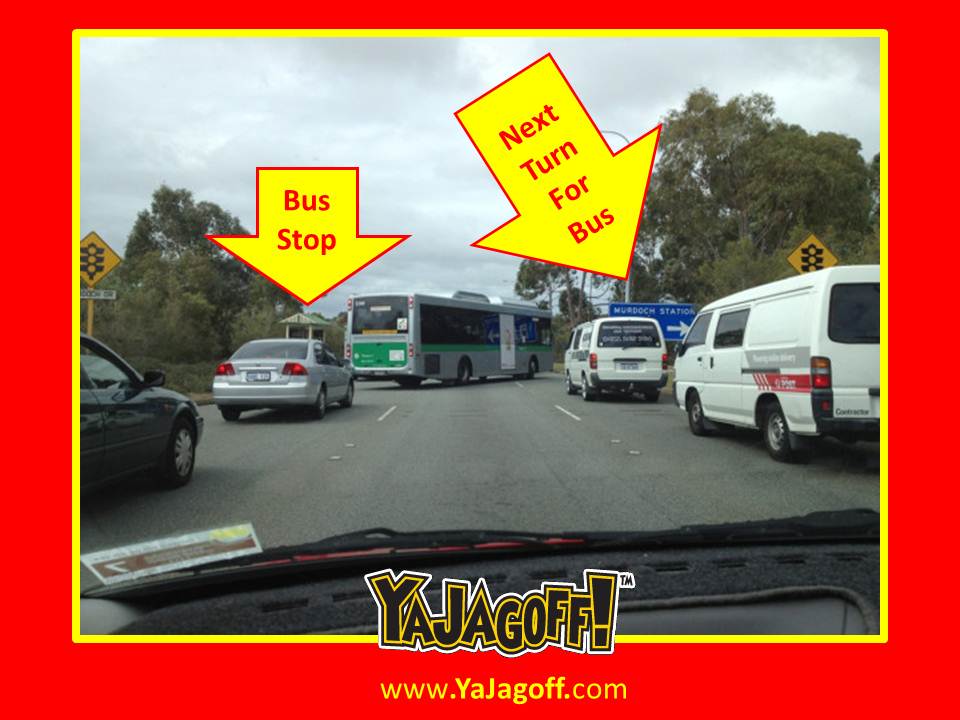 For anyone that thinks we are alone in Port Authority misery, check this out.  This is from Perth, Australia.   Now keep in mind, they drive on the wrong side of the road down unda….. but…common sense still has a role… except when dealing with the local bus transportation BLOKES!

So this is rush hour.  This is a bus that had to pick up people from the LEFT and then the next move it had to make was get all the way over to the RIGHT for a right-hand turn!!!!!  Kinda reminds you of being in Downtown Pittsburgh at Stanwix Street when buses are screwing everything up …. getting a green traffic light and then stopping 10-feet through the light to drop of 60 passengers while everyone else WAITS to get through the light.

What logic goes into this stuff??  It just continues to feed our theory that “it takes 1 bus, to screw up traffic!“

The sad part is, this maneuver made TOTAL SENSE for some “traffic engineer” to design this on paper or an APP.  Yeah, sure.  The bus has to cross 4 lanes of traffic during rush hour.  That should be just fine!!!!!

And don’t blame the driver, they would have never designed this on their own!!!!

We’re thinking the designer of this route is that SAME smart alec KID that grew up at Seven Springs skiing across all of the trails…..crossing Green Square trails over Black Diamond Trails.  Hell, why not throw in an “I stop for bingos!” Dodge Aries K car in the mix somewhere too???

Hey, like the German car engineers say to the Japanese car engineers…. the reason the German cars are better is because the German engineers actually DRIVE CARS!!!  Hey Transportation Engineers, ya might want to get on one of those buses and see how these routes REALLY GO.  And while you’re doing that, you will probably realize that the silly money-taking machines you’ve installed in the front of the bus take a dollar-bill slower than my Depression-experienced grandfather, Ya Jagoffs!!!!

Thanks to @beaup33p from Twitter in AUSTRALIA for the pic and for being our Honorary Jagoff Catcher today!!!!!!