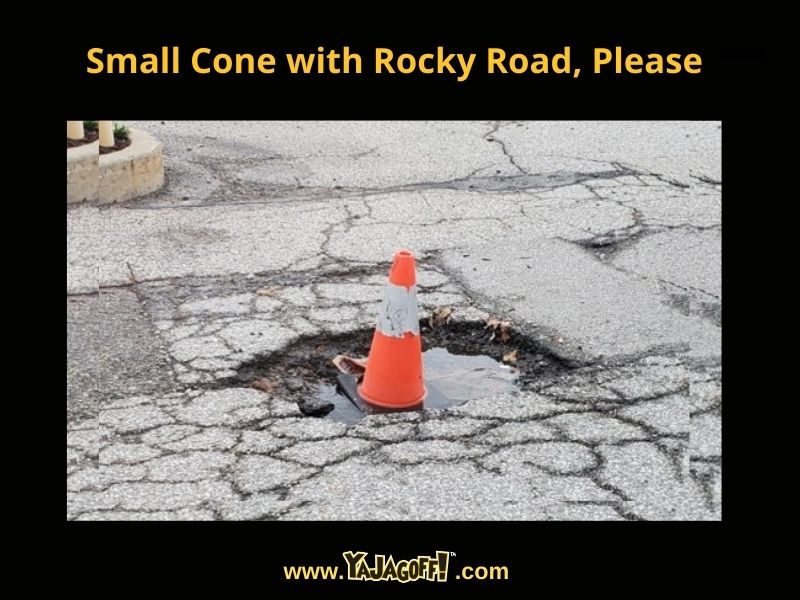 Construction is ramping up on major highways and small neighborhoods as if the meteorologists declared a snowstorm for next week.  Like contractors, start your construction project and go!  And ‘Operation Construction Everywhere’ MUST have caused a shortage in cones to help peeps be aware.

No more annoyance on the construction probs than usual from this gal, but is it safe to assume that is why the cone used for identifying this small sinkhole is barely recognizable? Like I have seen small cones used for driving designation areas, even along with the larger ones to point out a project, or used as a warning. But this lil fella?  What is the point? The hole in the ground is larger than the identifying cone.  For realz, this is the small Paul of construction cone guys.  Lil man syndrome at its max.  All, get your readers out to spy this caution guy.

Ok, rant over. Can’t imagine any other reason for using a cone inside the crater, sinkhole, whatever.  Just be cautious over there at Ross Town Center when you are shopping Aldi. In fact, it looks like the sinkhole already ate up a store circular, ya jagoff! Thanks to Lisa Malay for the photo.