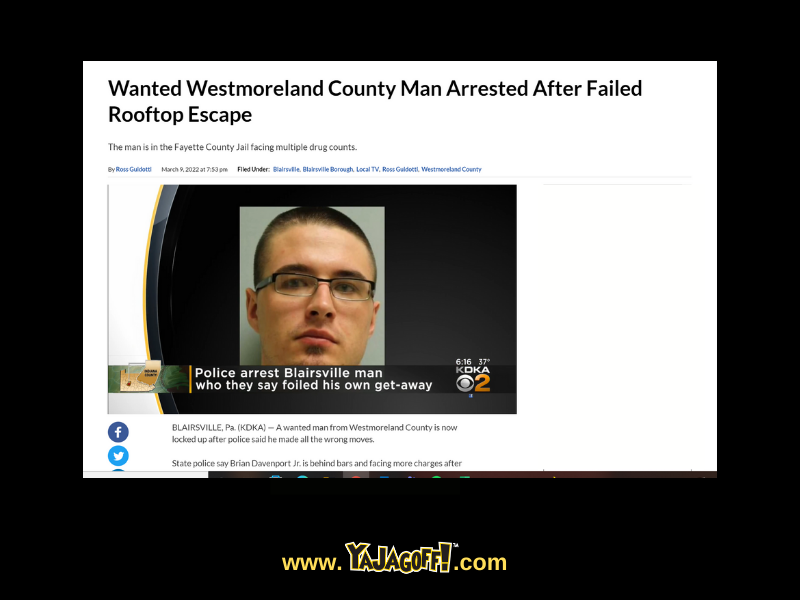 Stealing from a nice traditional Christmas song… “Up on the rooftop criminal claws? Out comes good old Brian D.”

Wait.. that doesn’t work as well as the original but, perfectly highlights today’s jagoff.

When you’re wanted by the authorities, including scheduled to be at a hearing, you should probably go.. we think. But, if you DON’T show up where and when you’re supposed to be, it probably is best to plan an escape route that allows you to actually ESCAPE.  Brian D, who was wanted for a few things, see full KDKA-TV story, chose to escape via his house’s roof.  The bad news is, he found himself at a dead end because, he had no way to get down.. and away from the police!!

Haaaaa.. so there he was.. like the morning rooster with no place to go. Continuing with the foul fowl references, he was a sitting duck for the cops to catch him.

Brian D…seems like your Spiderman abilities to scale a drainpipe are pretty good… but the thinking through the entire exit strategy was a little week.  Let’s go with one more feathered fiend reference, hoping you have “aviary,” nice time in jail, YaJagoff!  Did you get it??  Aviary.. a VERY?  Haaaa.. Crack myself up!