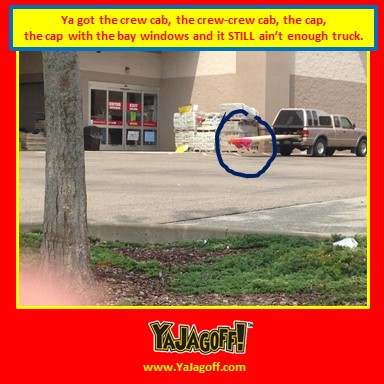 Well… everyone in Western Pa seems to be no more than 3 steps removed from a “buddy with a pickup.”  Not sure if these people borrowed the wrong sized truck or, if they are the people with the truck and just didn’t know of anyone with a 12-person cargo van.  Either way, looks like they should have sprung for the few bucks for delivery.

In my humble opinionated opinion… NOPE!

I mean, ya got the ultra-mega crew cab, the crew-crew cab, the cap with the bay windows, maybe even one of those special electronic horns that plays 25 notes of “La Cucaracha,” and it STILL ain’t enough truck…at least that’s the way it appears to the rest of us!!

I’m pretty sure that a normal person would look at that and say, “hmmmmmm.. that ain’t looking too good.” Because you know, sure as s#%t, that, with a few bounces over some potholes, the back end of that lumber is gonna be bouncing those red ribbons more than a light-weight teenager on Kennywood’s Jack Rabbit.

I mean… seriously… rent the $35 delivery truck, Ya Jagoff!

Thanks to @TeenyC87 for being the Honorary Jagoff Catcher!