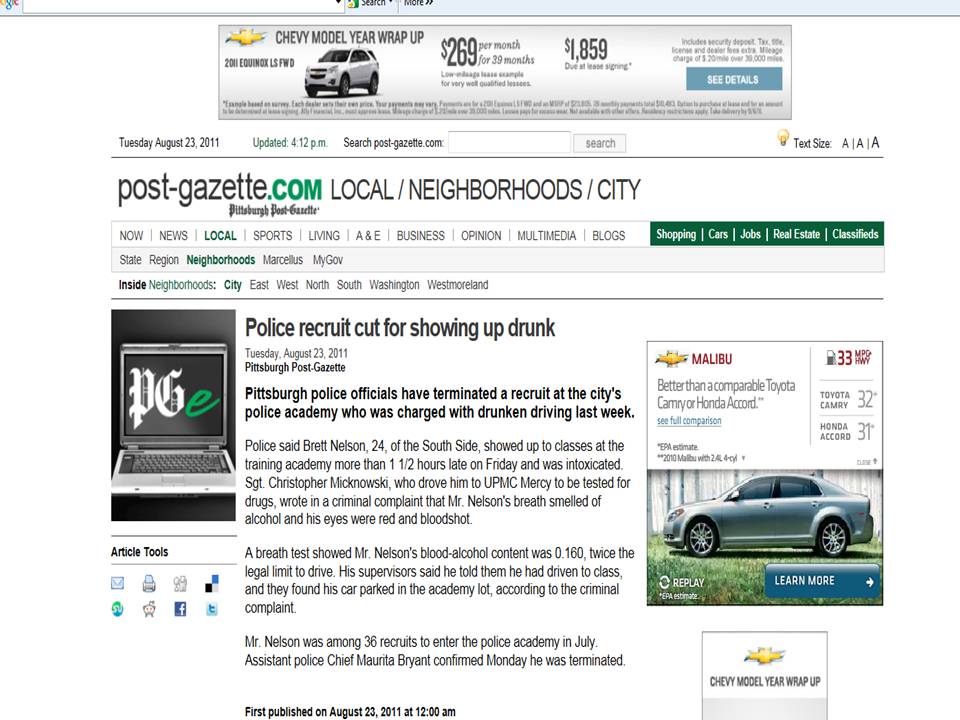 We all know that the South Side has a bit of a reputation for stories related to invibing in alcohol.  From people peeing on porches, sleeping on cars, yelling all through the night for their “Mama,” alleged firefighter fights but, THIS might be our favorite.

We all ALSO know how nerve-racking it can be to be walking into a new school or new job.  It rumbles the bowels of even the most hearty of men and women (Like a Sheetz Burritto at 4am).

Seems that 24 year-old Brett Nelson, FROM THE SOUTH SIDE, got himself a spot in the most recent City of Pittsburgh Police recruit class.  We’re guessing he was a little nervous about class because he showed up, for the first day of training, with a blood alcohol level of more than TWICE the legal limit.  He was fired on the spot!!

Bretty-boy, don’t you know that the ONLY time alcohol and firearms are mixed is at DEER HUNTING CAMP?????

Well, our Jagoff Investigative Reporter sat down with Never-Better-Bretter and, it turns out, he had a GREAT alibi:  He saw on TV how the police recruits have to be tasered themselves in order to be signed-off on using a taser gun – so that they can understand the feeling.  Well, Never-Better-Bretter said he thought the same applied to drunken drivers – you can’t arrest one if you don’t know what drunk driving feels like!  He was looking for some EXTRA CREDIT BROWNY POINTS!!!

Brett, some students in first grade pee or poop their pants on the first day of kindergarten but they survive other than some name-calling through their entire elementary school carreer.  It would have been a WHOLE lot better if you just would have gone in sober-and-nervous and soiled your drawers vs. being (HICCUP) drunk!  To put it another way, better to live life employed as Officer Poopy-pants for the next 20 years than being referred to as “The Unemployed Neighborhood Crime Watch Guy Who Sits On A Chair On The Sidewalk In Front of His House On The South Side Every Day Scratching Himself Cuz He Was Drunk When He Tried To Become A Cop”  Ya Jagoff!!!