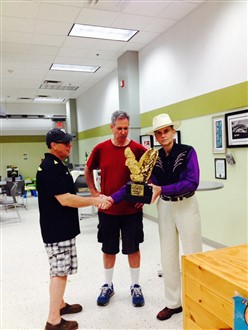 He’s not just a guy.. he’s a chef.  But he’s not just a chef, he’s a Pittsburgh Chef with a great heart for Pittsburgh a great sense of humor and a podcast called “CookSpeak.”  Well, Tom gives away a handmade award to people that he believes are Pittsburgh Supporters.

On May 31st of the 2015th year of our Lord, Tom presented me with the esteemed award.

See video of the presentation:

Despite the controversy, Tom let me keep the award and have a day with it… just like the Stanley Cup only BETTER!  Here are some pics.

Some pics I’ve chosen to NOT post like the one where, during the celebration party, Phil Bourque throws the award into Mario Lemieux’s pool and it gets kind of broken.  I also slept with the award.  Unfortunately I drooled on it and it wasn’t a pretty selfie. 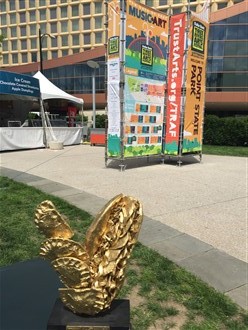 First thing I did was take it to the Three Rivers Arts Festival.. BEFORE the rain hit.  A bunch of people stared at me as I walked around with the award… I thought it was because they recognized me and the award.  Then I realized that my shirt tail was sticking out of my zipper. 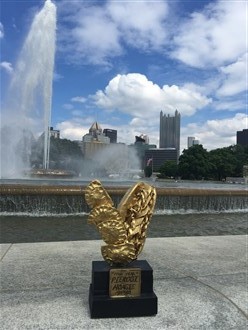 Of course, I had to take it to the fountain at the Point so it could feel the mist. 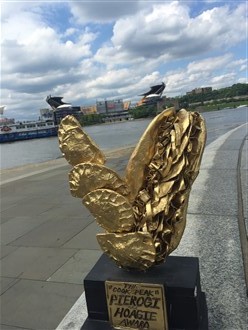 I thought that it might be cool to take the award over to see “The Chief” statue and then I realized it was 80 degrees out, I had dress shoes on and I wasn’t about to walk all the way over there.  So I turned the trophy around at the Fountain and BOOM… a picture with Heinz Field in the background. 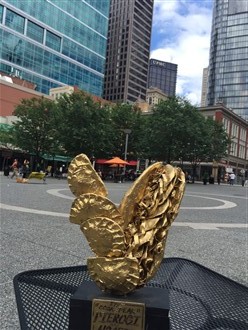 And of course, I couldn’t NOT stop by Market Square where most people who saw me carrying it and skipping around joyously just asked me for money or a cigarette. 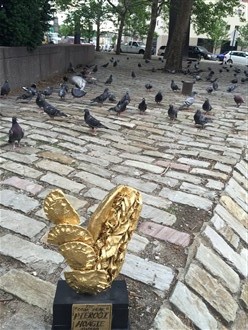 And why wouldn’t I get some Pittsburgh Doves in on the day.  Don’t worry Tom, none of them nibbled OR pooped on it.  And then it was time to put the Pierogie Hoagie Award with it’s esteemed trophy peers! 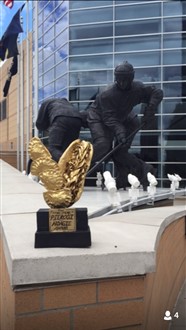 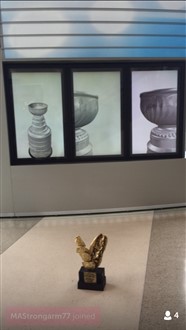 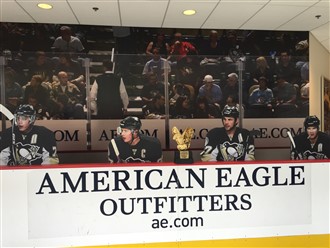 The security guard at Consol American Eagle entrance kept his hand pretty close to his taser when I walked in with the Award.  But after I showed him the award, he wanted to know if I needed escorted to Mario’s office.  I was on a short time schedule so I just asked him to let Mario know that I had been there and, if he and Ron Burkle wanted to include the award in the upcoming Morgan Stanley asset review, that I would have to talk to Tom, the trophy owner.

And then it was off to try the new BikePgh bikes.  As you can see, there were hardly any available but, once people realized that I was holding the Pierogie Hogaie Award, many simply offered me their bikes.  I didn’t want to take advantage of my award-winning (nor did I have an ATM card on me to rent one of the bikes) so I simply used the bikes for a wonderful still-life award-winning photo. 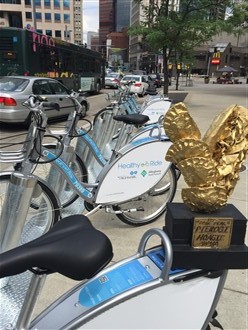 At this point, the day goes into a blur once a private car picked me up and took me to Mario Lemieux’s house for the big party.  Again, no comment on whether or not the trophy ended up in Mario’s pool.  And no comment how long I was there before the burglar alarms started going off.

But then, it was time to take “PH” as I had aptly named my new friend Pierogie Hoagie Award…. Primanti’s in the Strip.  Once again, I didn’t have my ATM card so, I walked in, told the counter folks who I was, showed them the award…and then.. they promptly asked me to please leave.  That’s why the pic is from outside and I got it right before the cops showed up to escort me away from the entrance. 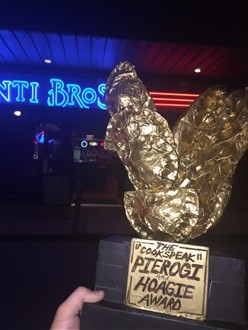 Ok.. time to call it a day and return the trophy to Tom. 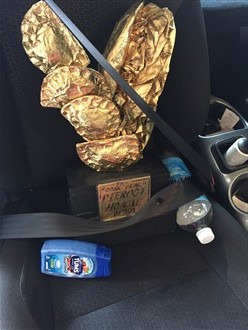 I seatbelted that sucker in for safety and, well, you can tell it was a crazy 24 hours.  Tums and an empty bottle of club soda.  Thank GAWD that trophy doesn’t talk.  Whatever happens with the Pierogie Hoagie Award…well…stays in Vegas. But I didn’t take it to Vegas so, it no worries that it doesn’t talk.

Thanks Tom for the distinguished award.  And thanks much to the original winner of the Pierogie Hoagie Award, Nied’s Hotel singing icon, Slim Forsythe for coming to present the award!

Back to talking Jagoffs tomorrow!