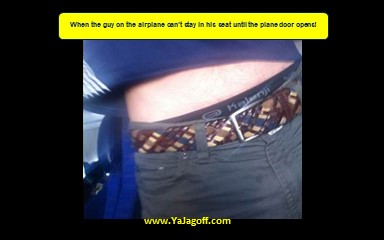 I am one of the most impatient people in the world. Just ask the guy sitting in front of me at any red light who doesn’t hit the gas pedal within .0001871 seconds of the light changing to green.

But, for the life of me, I don’t understand the concept of, after a plane lands, as soon as the seatbelt light goes off, people have to stand….even in the back rows, people get up DESPITE the fact that the airplane door has not yet opened and there’s no place to go.

People stand up, look around, bump into the other impatient people that stood up and have to look for their bag in the overhead compartment 3 rows back, or worse yet, just stand there in some contorted position.

I was fortunate enough to have an aisle seat so that when this guy in row 28 got up to get his bag, which was above my head, I got a chance to see this. And not only did I see it…he took so long to get his suitcase, I actually had time to lock and load my phone and snap a picture.

So to “Tragic Mike” the airline stripper thanks for the show.  Sorry I was out of dollar bills. I hope the Chucky Cheese tokens, that I dropped in there, help “the cause.”

And to everyone else who thinks they are going to get off of the plane faster by getting up and standing in the aisle before the airplane door gets opened, sit the hell down and relax for 2.1881 minutes, Ya Jagoffs!