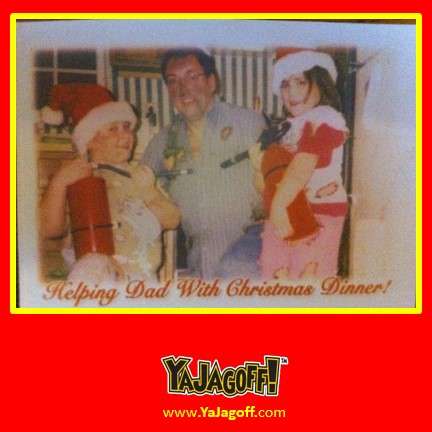 You all have been good in supporting me.. so time to lend a hand to CHS!

“What is the nicest thing that someone has done for you during the holidays?”

There have been a lot of nice things that various someones have done for me/my family over the years.  But probably one of the greatest things that anyone has ever done for me is provide me positive support during difficult times.. interpret that word “support” as listening to late-night rants on the phone, sulking over multiple beers, and late night pig-outs at the Eat n Park buffet.

(Bright Side Example of Being Single: No longer had to waste electricity on a bathroom exhaust fan!!!)

For example…  we would no longer have that “special” family Christmas card like everyone else… all of us sitting in matching clothes, all of us with Mickey Mouse, all of us posing with fake presents…. whatever.  But… at the very last minute, it came to me… make a goof Christmas card.

The first idea… pretend that the kids had to help me cook Christmas dinner and poke fun of my potential lack cooking skills. Make THAT a picture and put it on a Christmas card!

This was before Snap Chat and any other photo editing was available to every monkey that owns a computer or phone.  I pulled some old clothes out of the hamper.  Lit them on fire… burned holes in them.. saved the ashes to smear on our faces… grabbed the fire extinguishers for props, the camera and a stool to sit it on.  BOOM!

After about 40-minutes of wining, sighing, moaning and 381 retakes worth of torture, a Christmas card was born.  Its the picture at the top.  I went to Pat Catan’s, for some cheap cards and envelopes… and BOOM .. a new Christmas tradition was born (we didn’t actually say BOOM for everything awesome back then but it kinda makes me look cool here).

Friends and family loved the card so, every year since then, we go through about 90-minutes of ABSOLUTE HELL trying to take the annual Christmas card pic….including trying to pose the family dog in the last 9 of them!

When I announce its time to take the annual Christmas card pic each year, I get the same hateful looks from the kids AND the dog…. you know…that look little kids give when you tell them they HAVE to go visit that one lonely aunt, that smells like cat pea, likes to kiss them on the lips with an open mouth and always has Mylanta goo in the corners of her lips.

But its all worth it when we here people actually saved our Christmas cards from year-to-year vs. tossing it on January 2nd, with all of the other ones they had scotched-taped to their door frames!

Sooooo…..the nicest thing someone has done for me for the holidays is… push me back in the ring when I wanted to throw in the towel.  Thanks to those awesome friends.. Don, Richard, Kurt, Jan, Harvette, Mike, Val, Gary, Holly who gave me something to cherish forever.. your time and support.  I love ya, Ya Jagoffs!

This post was written from a prompt by Community Human Services Holiday Gift Drive in partnership with Pittsburgh Tweetup. To learn more about the CHS: Holiday Gift Project and how you can get involved click HERE.

What’s the nicest thing someone has done for YOU during the Holidays? Comment below.

You can see some other CHS posts by Pittsburgh Bloggers here:

Helping Others Have a Merry Christmas by The Green Grandma
The Nicest Thing Someone Has Done For Me During The Holidays by Pgh Sports Forum
Pittsburgh Tweetup, CHS, And The Holiday Gift Drive by Bald Fat Guy
5 Things For Friday: Best Gifts of Holiday Past by MissBritt
Holiday Goodness by MrsGregWillis
The Holidays Are Here by SaborPGH

Nicest Thing That Has Ever Happened by LJRain

Our First Christmas by TiffanysBlogs