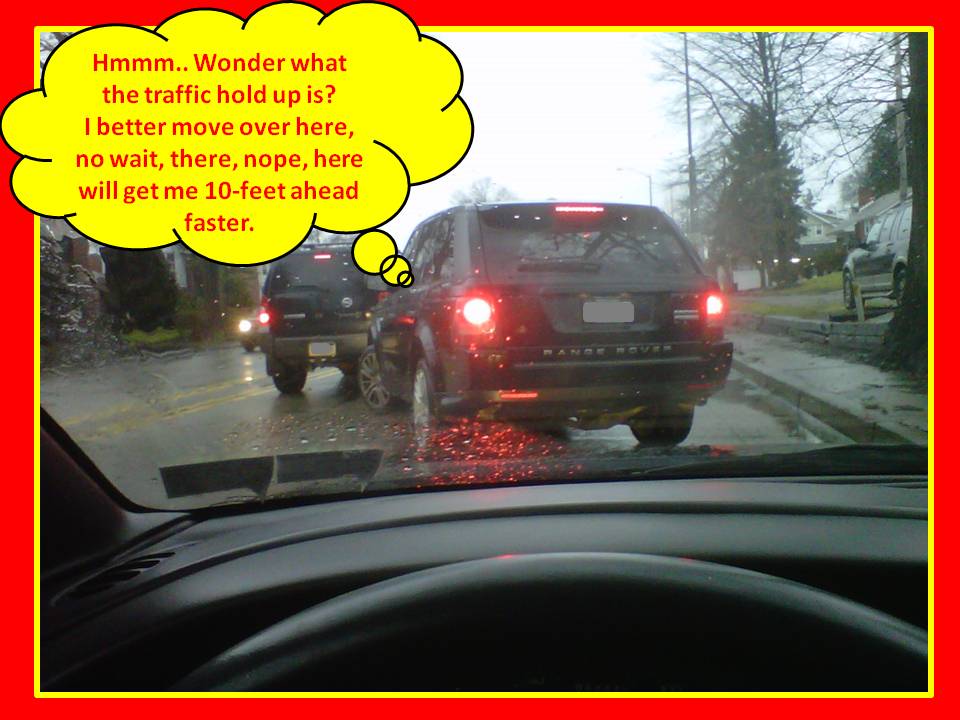 The word is continuing to get out!  You might as well remove the horns from all cars in Pittsburgh.  There is no more need to express anger while driving… not even by high-beaming the guy in front of you!  Simply SAFELY snap a pic of the person and send it to us.  The process can have more of a RELIEVING effect than a hot-stone massage or that emergency pee you take after a 5-hour drive during which you drank 7 Turner’s Premimium Iced Teas. (You know when you roll your eyes back and almost pass out while you’re urinating?)

This was on Rt 65-N this morning in rush-hour traffic. Was in the right lane for a while then decided to switch lanes (neither lane was moving as there was a red light). Sat straddling the lanes for 5 mins until the light turned green and  left no room for anyone to pass him.

Who hasn’t seen this?  The driver, in a big hurry, just has to switch lanes RIGHT NOW and block everyone else from moving forward up either lane.  Sometimes you even see this on the Fort Pitt Bridge heading outbound or just before the Squirrel Hill tunnel entrance outbound.  (Hey, maybe its the same driver? Naaaaaaaah!)

This is exactly why this blog was created… to call out the people, like this driver, that are full of self-importance, without regard to other Pittsburghers.

Hey Range-Rover-Grover, yep, we see your fancy car.  And we’re pretty sure that you have to get ahead of everyone because you have something pressing at a very swanky office where everyone knows you’re the boss and you’re important.  BUT.. in traffic, we all put our driving gloves (and our pants) on the same way. There’s no class war between right and left lanes of traffic.

Did anyone ever teach you the art of driving in traffic, activiating your turn signal, looking for a spot in your sideview mirro and gradually sliding over into the next lane? Ahhh who needs skill and courtesy when you’re driving anyway?

We’re taking a WILD GUESS and presuming that you’re the same person that walks through the mall, yakking on the cell phone, and suddenly stops DEAD in front of a line of people because you’re making a point in your conversation..you know.. when it looks like a bad Bunny-Hop Line Dance accident!

The rest of us would like to get to where we’re going too so, unless you’re part of the Steelers Offensive Line and you’re PAID to block up all of the lanes, pick a lane Ya Jagoff!

Thanks to Twitter Follower @syntaxxerrorrr for being our Honorary Jagoff Catcher today.