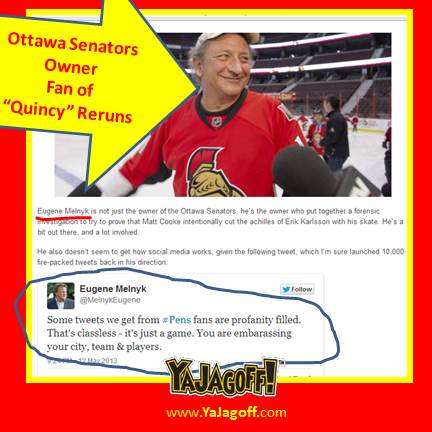 Well, the Penguins are facing the Ottawa Senators.  And now this whole thing of the Penguins’ Matt Cooke “purposely” using his skate to cut Senators’ Erik Karlsson’s Achilles Tendon in a weird play during the regular season is a key part of the story line. The Sens owner, Eugene Melnyk has even gone to the point of personally hiring a private investigation team to PROVE Cooke’s actions were purposeful.

But no word on Melnyk’s hiring of an investigative team for HIS player’s recent knock-out shoulder placed on the Canadiens’ Lars Keller.  And why would he?  Like Cooke’s hit, it was an unfortunate part of playing hockey! 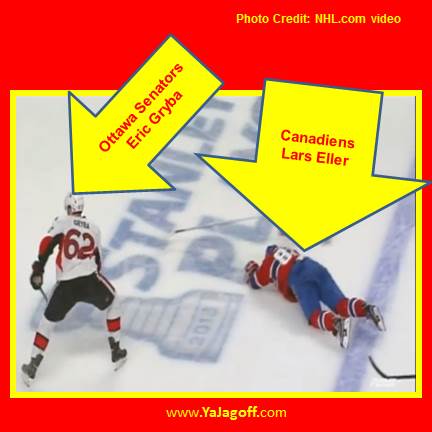 The other day, when it was named that it was the Pens vs. Sens in the next round of the Stanley Cup Playoffs, apparently a few Pens fans started some nasty-word Tweets to the Sens owner.  So, instead of chucking it off an attributing it to a couple of outta control Pens fans… who may OR may not actually be from Pittsburgh, Eugene-the-Agitator stirs the pot a little more by tweeting the following message:

Some tweets we get from #Pens fans are profanity filled. That’s classless – it’s just a game. You are embarrassing your city, team & players.

Indeed it is a GAME!  And sometimes the players get hurt which is very unfortunate.  So bring in whatever investigative teams you need to chase Matt Cooke around town when he gets to Ottawa. Feel free to be distracted.

And, let’s make one of those City-vs.-City bets…like… when the Penguins beat the Senators, you agree to call off this Witch Hunt and, since those private investigators will need something to do, why don’t ya pay to have them come to Pittsburgh and, once and for all, solve OUR mystery of the B-25 Bomber crashing into and being secretly removed from Monongahela River. Now THAT’S good use of your INVESTIGATIVE money, Ya Jagoff!

NOTE TO EUGENE:  The word Jagoff is NOT profanity.

Special thanks to @Pmmalinowski for suggesting today’s blog post!!!