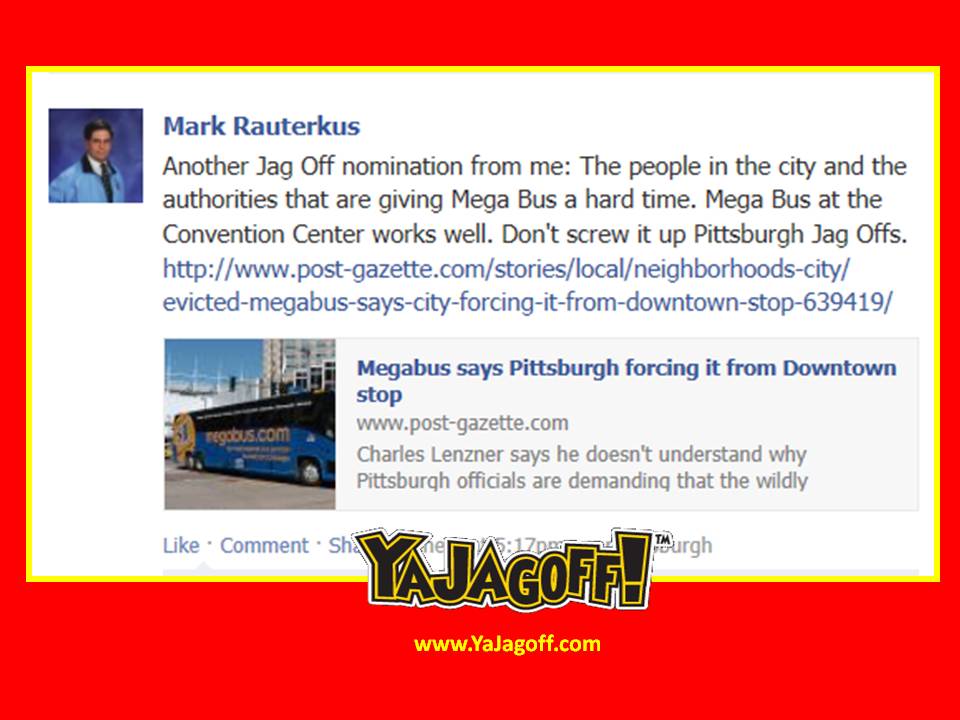 Last week follower Mark let us know about the potential movement of the Downtown Pittsburgh Megabus stop.  Apparently the riders are leaving trash at the Convention Center pick-up/drop-off point and are using the center’s restrooms inappropriately.

From the Post-Gazette article yesterday:

The new stop will be on Penn Avenue Extension, between Stanwix Street and  Liberty Avenue and next to the Port Authority’s new Gateway Station, spokeswoman  Joanna Doven said.  (See full article HERE)

Say what ya wanna say about moving the stop.  For the move or against the move… it’s your call.

But here’s OUR gripe: What other regular activity goes on at the Convention Center?  It’s not like they have huge conventions their more than 4 times a year!!!  So they moved the pick-up/drop-off point from the hardly-used Convention Center area of Downtown to the heart of Downtown, the Gateway Center area where it seems that every car, PAT bus, school bus, truck, bulldozer, Segway and pack of llamas (during The Furry Convention only) passes through !!!!

As a JFYI (Jagoffery For Your Info) , this new pickup location is right across the street from the Highmark building– food court, bathrooms, etc.  Just think if Dr. Melani was still at Highmark, he would be shoving this in the face of UPMC’s Jeff Romoff going, “Haaaaaa.. haaaa.. look at what I have..haaaa.. lots of people looking at my sign!!!”  Then Mr. Romoff would go and purchase 3 downtown buildings, WITH CASH, then tear them down and make it the taj mahal of Megbus stops!!!  (Yeah, we miss those Melani vs. Romoff days!)

By the way, this new Megabus stop is also next to the new North Shore “T” stop in Gateway Center.  The good news of that is, all the people waiting for the Megabus can converse with large throngs of people standing in line for the occasional “T” car going to the North Shore.

OK.. so back to the fact that the Megabus that is now going to stop for extended periods of times IN ONE OF THE MOST CONGESTED AREAS of Downtown Pittsburgh.  Really?  Hey, if you’re gonna screw things up by changing the Megabus stop, why don’t you just go full Jagoffery and put the Megabus pick-up right at one of the merging on-ramps to the Fort Pitt Bridge where you can REALLY screw with traffic every day, Ya Jagoffs!

Thanks to Mark Rauterkus for being our Honorary Jagoff Catcher today!