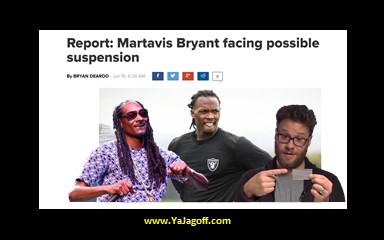 Martavis Bryant was not singing along to black and yellow and he didn’t find JuJu as entertaining on and off the filed as the rest of Steelers nation and beyond did. But that is not what caused his trade to the Oakland Raiders.  He declared that he wanted a change of scenery, and while he exchanged cold winter games for palm trees and a silver uniform, one thing did not change.

Martavis may pass on the tune of Renegade and pass on Tomlin talks, but he can’t pass a drug test to save his life. Okay, it has not been proven yet that he has not passed, but a lot of signs are pointing that way. And the change of scenery that he was going for may become bars to look through while wearing a black and white striped inmate suit instead of an NFL uniform or, just being broke, eventually, from blowing his talents up in smoke!

Martavis… keep enjoying the smoke screen vs. the screen pass… you will soon be in the record books… albeit for being suspended more games than you’ve actually started all because you can’t follow some basic adult rules. We won’t bother making any more jokes.. you’re ALREADY the joke.. the smoke joke… YaJagoff!