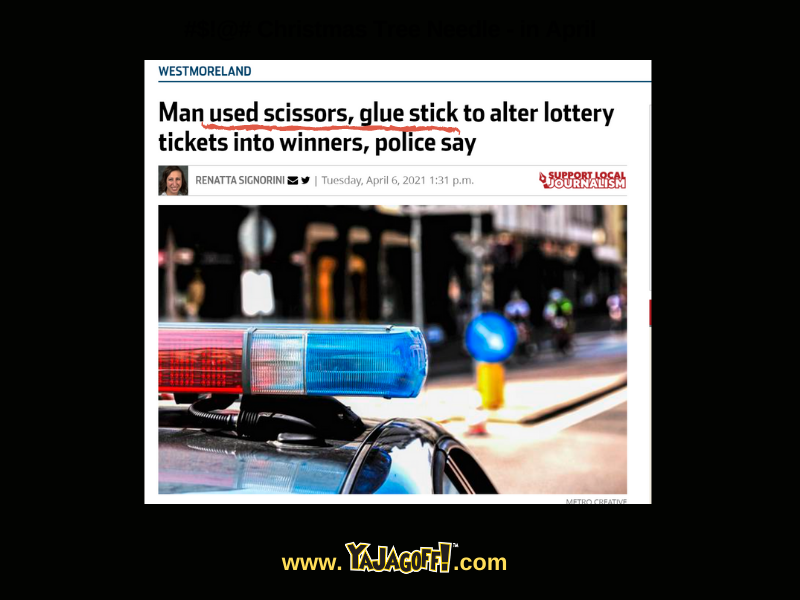 Yep.. as it says in the pic, a guy literally cut apart some lottery tickets and, with the help of a glue stick, created “winning” tickets! Here’s the full story on www.TribLive.com.

The best part is, he got away with it a couple of times the week before!! Yikes to the cashier with bad eyesight who was probably declined for being a nun (nun-eyes are the sharpest) or a military sharpshooter at some point in their life!

“Police seized from Stout a pair of scissors, a glue stick and another lottery ticket that hadn’t been altered.” No documentation yet if he had any varied colors  of construction paper, street chalk, glitter or scrapbooking supplies on him. Also, the police report was incomplete regarding whether or not the suspect had is tongue stuck out to the side of his mouth indicating he was intensely cutting with scissors or carefully gluing.

Bottom line.. he was successful at this game and.. GOT GREEDY! And then he got caught.

Mr. Stout…cross your fingers and hope that you do not get judged by a “jury of your peers,” which, in your case, would be 12, unskilled kindergarteners who have no fine motor skills as of yet. because, even that group, we believe, would be pretty judgy about your lack of judgement and scrapbooking skills. At least, you weren’t one of those people that holds up the entire checkout line because to play 1,489 number combinations because you had a dream about a spider driving a military tank across a tundra while you were dancing in your undies to a Clarks record, Ya Jagoff!