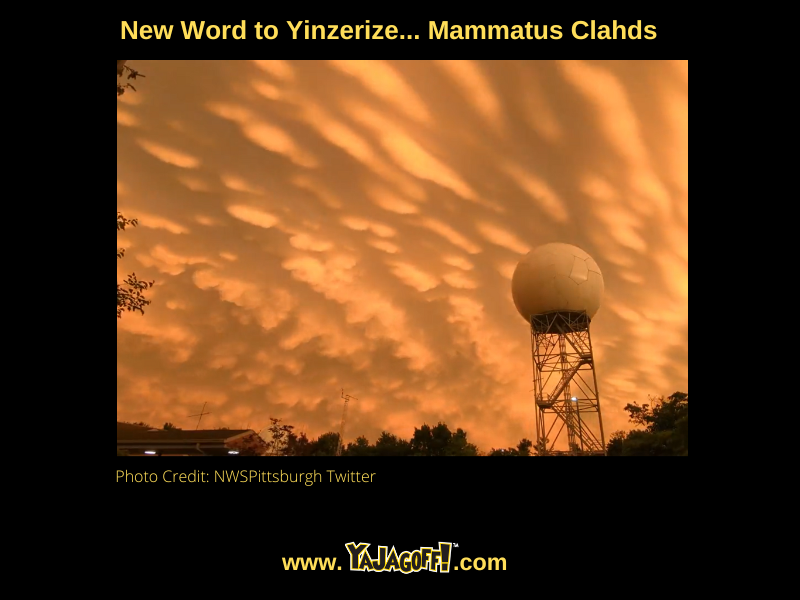 Of course, now we know what they are called but, when it was occurring, we’re pretty sure that Google recorded the highest number of searches for the words Armageddon and End of the World.  The odd hanging clouds were beautiful but, then again, so is a wild tiger, beautiful in it’s natural setting but… well… you know.. it’s ominous.

Mammatus clouds over Western Pa are exactly why social media was created.  Everyone takes a pic, posts it on social media with a comment like, “check aht the sky tonight!”  Then suddenly others post the same kind of pic trying to be the best pic that gets Likes, Shares and Comments. It makes social media fun. Eventually the local news feeds and shows tell us what we saw.

FYI, when we Googled mammatus clouds, we got this: Mammatus are pouch-like cloud structures and a rare example of clouds in sinking air. Sometimes very ominous in appearance, mammatus clouds are harmless and do not mean that a tornado is about to form; a commonly held misconception. In fact, mammatus are usually seen after the worst of a thunderstorm has passed.

Whew! NOT Armageddon or the End of the World!

Meantime, we have a new word, like Dan BLYsma and Mike TomLINSON to butcher with Pittsburghese… mammatus clouds.

Not sure how the word mammatus is gonna come out at the next few neighborhood social settings but, pretty sure that “mamOOTis clahds” is in the running!

Thanks for the scare, last night, mother nature, but thanks for the awesome sky show at the same time, Ya Jagoff! – used in the term of endearment manner