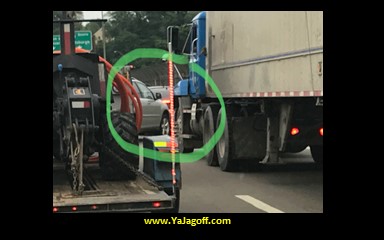 This happens every day. Especially at this intersection of the McKees Rocks Bridge and Route 65 during inbound rush-hour.

As a side note, there is a second piece of jagoffery in this picture in that there is a tractor or backhoe on a trailer in rush-hour traffic!  Shouldn’t they have to go earlier or wait until rush hour traffic is over so as not to clog things up?

Back to our man holding up traffic. So now he makes a bad cut-in maneuver and is now blocking the left lane from going forward! I swear they could solve the city/county budget problems withing 45 days if they just cited these people.